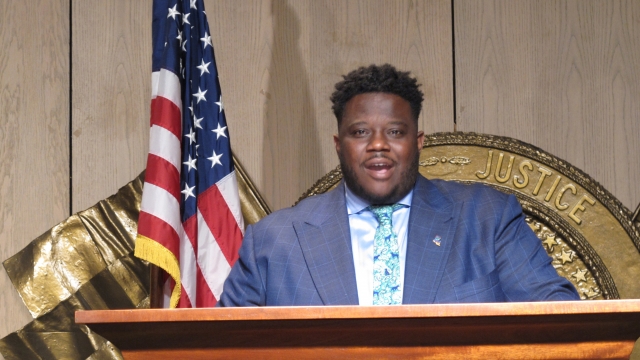 Many lawmakers and candidates in the upcoming midterm elections are pushing to decriminalize weed, even in states where it's not on the ballot.

Gary Chambers is "shattering" the perception of marijuana in his own way, as he's believed to be the first political candidate to smoke marijuana in a campaign TV ad. He says the feat means "we've got a long way to go."

"People drink on political campaigns every day," Chambers said. "Nobody ever says a word. Shouldn't be controversial. People smoke every day."

It's part of his social justice campaign to win over voters in his bid for the U.S. Senate seat from Louisiana, where he vows to pass a federal law making marijuana legal across the country to make sure there are no more stories like that of  now 56-year-old Bernard Noble.

Almost 16 years ago, Noble, who grew up in a rough part of New Orleans, was living out his wildest dreams as a restaurant owner in Kansas City, Missouri.

"I was just flourishing in Missouri; I was booming," Noble said. "I was the Yakamein king. I was doing so damn good out there."

Growing up, Noble says he was hellbent on being like his friends who ran the streets and sold drugs. He got busted several times for drug possession, but he says he always knew deep down inside that it wasn't the life for him.

"I took my street skills from drug dealing and just incorporated it with cooking, and it's the same thing," Noble said. "You cut, you count your bag, you call the distributor when the supplies get low."

That dream derailed in 2010 when he went home to New Orleans for a visit. He was with friends when cops pulled up and arrested them. Noble's crime, according to the non-partisan, nonprofit Marshall Project, was possessing two marijuana joints.

"I had a full-blown restaurant," Noble said. "I was making over 40 grand a year, and they wouldn't let me make bond."

Some of the most conservative states are voting on recreational marijuana. One of marijuana's biggest impacts is on the criminal justice system.

It was his third strike under New Orleans' three strikes law. He served seven years of a 13-year sentence, forcing him to miss out on seven years of his kids' lives.

Voters in Maryland, North Dakota, South Dakota, Missouri and Arkansas will vote Nov. 8 on marijuana legalization. Even though it's not on the ballot in Louisiana, Chambers and his ad have made it a hot topic there.

"I see cannabis as a gateway drug, not to harder drugs, but to better roads, bridges, schools and opportunities for people in the state of Louisiana," Chambers said.

"There's a man named Kevin Allen who's currently serving a life sentence in Angola Penitentiary for less than a gram of cannabis, but he's not the only person who's serving a life sentence or jail for cannabis," Chambers said. "The state of Louisiana takes my tax dollars and grows cannabis at LSU and Southern University and then sells it in the medical market, while in a very hypocritical way still jailing people for it."

Noble got out of prison early because of multiple supporters, including billionaire hedge fund manager Daniel Loeb. Noble has since become the face of a collaboration between marijuana brand Curaleaf and his own social change company B Noble, Inc.

Since his release from prison, Noble calls himself an advocate for ending non-violent marijuana charges .

"It's a part of a lifestyle for me now to fight for this marijuana thing on these nonviolent challenges," Noble said.

Chambers is helping him in that fight.

"Gary is a breath of fresh air," Noble said. "Anything he would push for on these nonviolent charges with cannabis, I would stand right by his side."

Chambers is seen as a long shot in his bid to unseat the current Louisiana Sen. John Kennedy, a Republican in a red state. But he says no matter how the election turns out, he will continue his push for nationwide legalization.