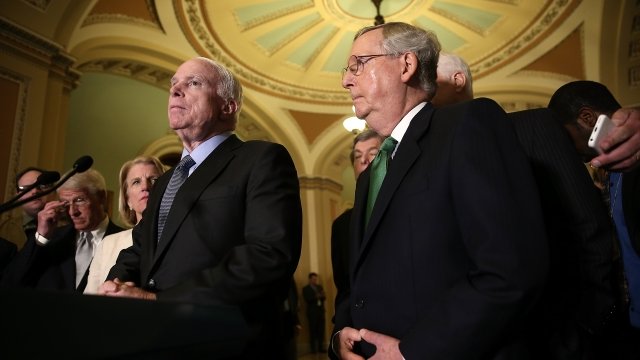 With two GOP senators opposed to the latest version of the bill, Sen. John McCain's absence means Republicans don't have enough votes to advance it.

Senate Republicans were forced to postpone a vote on their party's health care bill after Sen. John McCain announced he would be home all week recovering from surgery.

McCain revealed he had a blood clot removed from above his left eye on Friday and that he would be spending the upcoming week at home.

Majority Leader Mitch McConnell made the announcement late Saturday. The bill — the majority of which was written behind closed doors — has already been delayed once due to a lack of votes to bring it to the floor.

Analysis: Trump Budget's Debt Estimate Is Off By Trillions Of Dollars

The Congressional Budget Office's projection of the proposed 2018 budget had a $3.7 trillion discrepancy with the White House's projection.

At least two Republicans — Sens. Susan Collins and Rand Paul — have refused to approve the bill in its current form. Several others have signaled they're on the fence. And the GOP can only afford to lose two party votes, since every Democrat and both independents oppose it.

McCain himself seemed skeptical of the bill's chances. A day before his surgery, he released a statement saying: "If we are not able to reach a consensus, the Senate should return to regular order, hold hearings and receive input from senators of both parties" to produce a new bill.

McCain also has problems with the current bill. He said he would propose amendments that would shield Arizonans from penalties for having expanded Medicaid prior to the Affordable Care Act. He also said he would file amendments to lengthen the phase-out period of Medicaid expansion and change the growth rate for Medicaid.

McConnell said the Senate would continue legislative work while McCain was away. He did not say when he would return to the health care bill.