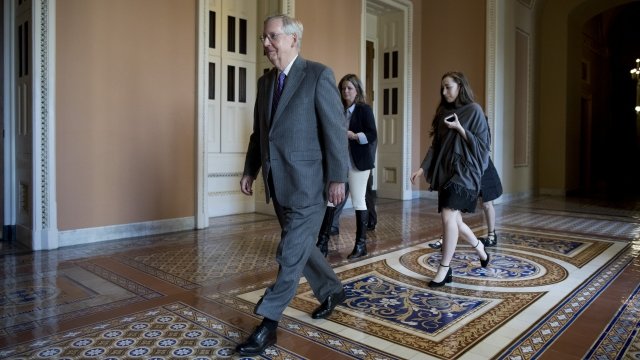 SMS
Senate Fails To Pass Bipartisan Immigration Bill After Veto Threat
By Jake Jones
By Jake Jones
February 15, 2018
The bill would have created a path to citizenship for DACA recipients and set aside $25 billion for border security.
SHOW TRANSCRIPT

The Senate failed to pass a bipartisan immigration deal on Thursday after President Donald Trump criticized it and threatened a veto.

The bill, sponsored by seven Democrats, eight Republicans and one independent, would have funded Trump's so-called border wall and given DACA recipients a path to citizenship.

But that bill apparently didn't go far enough. The White House issued a statement threatening a veto if it did make it to Trump's desk. It said the bill would "undermine the safety and security of American families and impede economic growth."

Trump instead voiced support for a bill by Sen. Chuck Grassley, which ends family-based migration and the visa lottery program. But Democrats are strongly against those measures, and it's not yet clear if the party would give in to the president's demands in order to secure a path to citizenship for some 1.8 million DACA recipients.