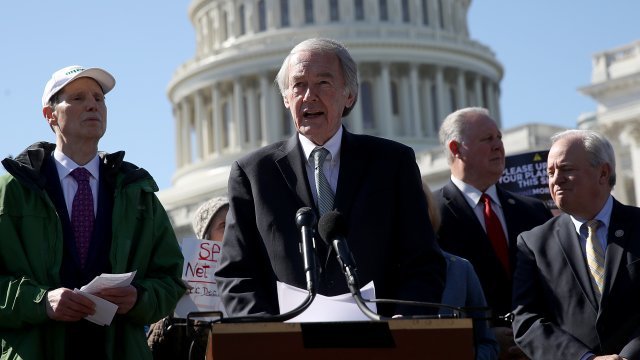 SMS
Senate Democrats Are Trying To Uphold Net Neutrality
By Gabrielle Ware
By Gabrielle Ware
May 9, 2018
Even if they get a simple majority in the Senate, their resolution still has some big hurdles to clear.
SHOW TRANSCRIPT

Democrats in the Senate have forced a vote on whether to uphold net neutrality regulations.

Federal Communications Commission Chairman Ajit Pai repealed net neutrality rules in December. They were created in 2015 to keep internet providers from slowing down or speeding up certain websites.

On Wednesday, Sen. Ed Markey and other senators petitioned to keep neutrality standards in place using the Congressional Review Act. It allows rules by federal agencies to be overturned within 60 legislative days of their introduction.

Fifty senators support the resolution, most of them Democrats. One Republican, Sen. Susan Collins, also supports the measure, but it still needs one more vote to gain a majority and head to the House.

Several websites started a "red alert" campaign in support of the effort. They're encouraging site visitors to urge Congress to vote in favor of upholding regulations.

Democrats are expecting a vote next week, but the deadline for a vote is June 12. Even if things go their way, though, they'll likely have a tough time advancing the resolution past the House.