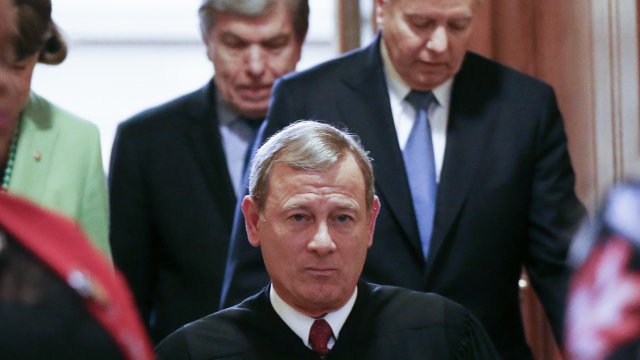 The U.S. Senate acquitted President Trump on both articles of impeachment, clearing him to stay in office and run for reelection.

In the hours before the vote, Sen. Mitt Romney announced he would break with fellow Republicans and vote to convict the president on the first impeachment article about abuse of power.

The Utah senator said he believed the core of the Democrats' claim that President Trump withheld military aid to Ukraine for his own political benefit.

"With my vote, I will tell my children and their children that I did my duty to the best of my ability, believing that my country expected it of me," Romney said in an emotional speech on the Senate floor.

He was the only Republican to vote against the president, angering Republicans who nominated him for president eight years ago.

Democrats did not cross party lines: All voted to convict the president, even Democrats from states President Trump won in 2016.

"I cannot and will not shrink from my duty to defend the Constitution and do impartial justice," said Sen. Doug Jones.

In a rare scene, senators stayed in their seats during the votes and answered "guilty" or "not guilty."

"The Senate adjudges that the respondent, Donald John Trump, is not guilty as charged," he said.

The Senate voted 52-48 not guilty on article one, abuse of power. On the second article, obstruction of Congress, the vote was 53-47, with Romney siding with Republicans.

"I don't think any of you doubt that this was the most partisan of exercises," Senate Majority Leader Mitch McConnell said at a news conference shortly after the vote.

The leader of the Democrats said the impeachment would stain the president's legacy.

"Democrats walked out of the Senate chamber with their heads held high because we sought the truth," said Senate Minority Leader Chuck Schumer.

The White House said the acquittal was a total exoneration for the president with nothing for Democrats to show for their efforts.