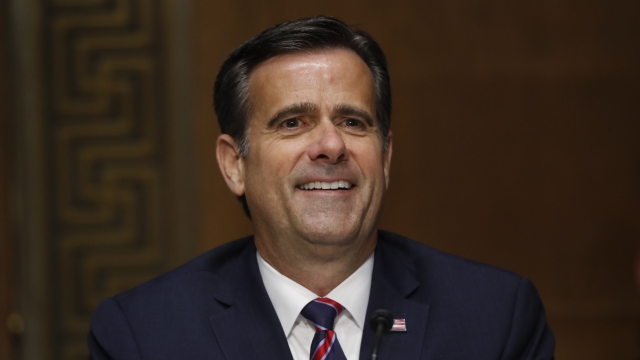 The Senate confirmed Rep. John Ratcliffe, a Republican from Texas, as the new director of national intelligence on Thursday.

President Donald Trump thought about nominating Ratcliffe for the job last year after Dan Coats resigned, but many lawmakers said he was unqualified for the position. He also faced controversy after falsely claiming he "put terrorists in prison." Ratcliffe later withdrew his nomination, but the president renominated him in February.

"I have to say that while I am willing to give you the benefit of the doubt during this hearing, I don't see what has changed since last summer when the president decided not to proceed with your nomination over concerns about your inexperience, partisanship and past statements that seemed to embellish your record," Sen. Mark Warner said.

In his new role, Ratcliffe will be a key player in deciding what documents are released publicly amid Congress' investigations into Obama administration officials, including Joe Biden, the president's presumptive 2020 opponent.

During his confirmation hearing, Ratcliffe said "keeping politics out of the intelligence community is one of [his] priorities." But Democrats seem doubtful.

"If confirmed as DNI, you have my commitment to deliver timely, accurate and objective intelligence and to speak truth to power, be that with Congress or within the administration," Ratcliffe said.

Ratcliffe was also part of the team that defended President Trump in his impeachment proceedings.