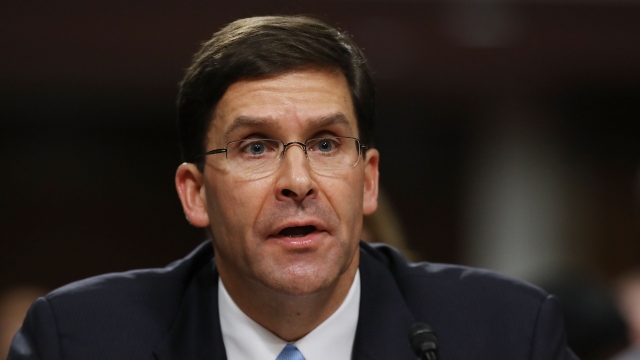 Seven months into 2019, the year's first permanent secretary of defense has been selected. The Senate confirmed Mark Esper for the position on Tuesday.

The former army secretary was tapped by President Donald Trump in June, and he served as the acting defense secretary after that. But according to legal protocol, he had to step down while he was being confirmed for the permanent position.

Richard Spencer, the secretary of the Navy, temporarily took Esper's place on July 15 when the confirmation process started.

Before Esper, another President Trump pick, Pat Shanahan, seemed to be on track for the permanent position of defense secretary. But he stepped down and withdrew himself from consideration in June after past domestic violence incidents involving his family were made public.

Esper might have seemed like a natural pick for the Trump administration. For starters, he's a former classmate of Secretary of State Mike Pompeo. He's made the "strategic competition" between the U.S. and China a priority. And he believes the U.S. needs to upgrade its existing programs to catch up to China and Russia's militaries.

However, his background in the defense industry has raised some eyebrows. After serving as an Army infantryman, he was a lobbyist for Raytheon, a major defense firm, for seven years. He then joined the Pentagon in 2017.

Here's the catch: The defense secretary has a lot of influence over which weapons the Pentagon buys. Not to mention, the Trump administration is currently unhappy with Turkey after the country decided to buy and use Russian-made missiles instead of weapons made by Raytheon.

During his confirmation hearing, Esper and Sen. Elizabeth Warren got into a heated exchange about his former employer, and she questioned his ethics. Esper said he's going to "continue to abide by the rules and regulations, and I'm going to continue to consult closely with my ethics personnel to ensure we stay in the ethical midfield."

With the Senate's confirmation, Esper will assume the role as secretary of defense immediately.