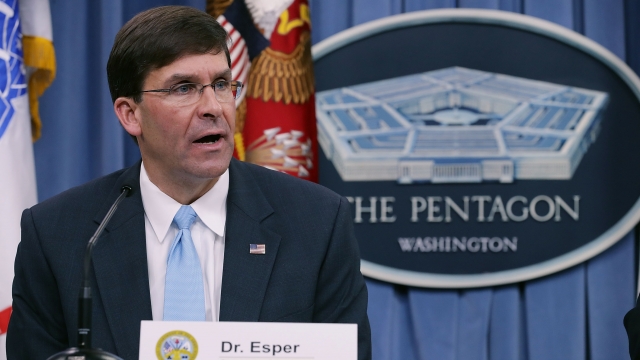 The Senate Armed Services Committee will hold a hearing Tuesday to potentially confirm acting Defense Secretary Mark Esper and give him the permanent title.

President Donald Trump officially nominated the army secretary for the position on Monday. There hasn't been a permanent secretary since last year, so senators are eager for stability amid increased global tensions.

Esper's a former classmate of Secretary of State Mike Pompeo. He's made the "strategic competition" between the U.S. and China a priority. He believes the U.S. military has fallen behind China's and Russia's and that it needs to upgrade its existing programs.

The position has technically been vacant since Jim Mattis resigned in December, but others have filled in temporarily. Pat Shanahan held the role most recently. He was nominated to fill the permanent position, but he resigned and withdrew from consideration in June after reports surfaced of past violent incidents within his family.

Esper took Shanahan's place, but now he'll have to step down before being confirmed as the the permanent defense secretary.

It's illegal for Esper to go through the confirmation process while serving as acting secretary. So Navy Secretary Richard Spencer will take his place until it's all said and done.

The Department of Defense said last week that 18 senior roles were unfilled. That number rose to 19 on Sunday; President Trump's pick for chief of naval operations retired amid questions surrounding his relationship with a Navy official accused of sexual assault.