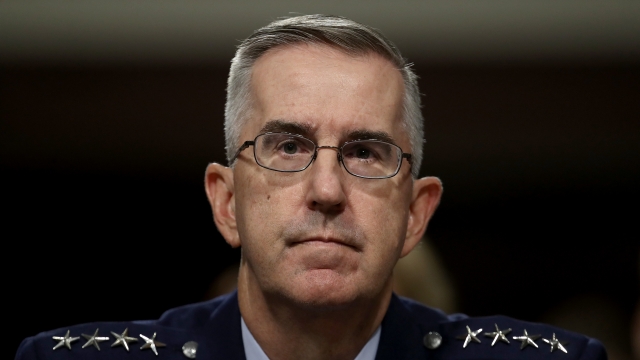 In a 20-7 vote on Wednesday, the Senate Armed Forces Committee gave the green light on Gen. John Hyten's promotion to vice chair of the Joint Chiefs of Staff. This comes after Hyten denied sexual misconduct allegations during his confirmation hearing a day before.

"I want to state to you and the American people, in the strongest possible terms, that these allegations are false. There was a very extensive, thorough investigation that Dr. Wilson described, which revealed the truth. Nothing happened, ever."

His former aide, Army Col. Kathryn Spletstoser, accused Hyten of making unwanted sexual advances toward her. She alleges he kissed, hugged and rubbed against her in 2017 when they worked closely together. She says she pushed him away and told him to stop. Spletstoser also says Hyten tried to derail her military career after she rejected his advances.

She says she never reported it because she feared retaliation and embarrassment, and thought that if Hyten were retiring soon, he wouldn't threaten anyone else. The colonel said she came forward now because she didn't want Hyten to have the opportunity to abuse anyone at the high position he is being considered for.

The Air Force Office of Special Investigations went through 10,000 pages of documents and interviewed as many as 50 people, but concluded there was no evidence supporting sexual misconduct. But it also said it found no evidence that Spletstoser was lying.

"What's happening here today is a political spectacle done at the expense of an innocent victim who has never lied on anything, who has a perfect and unblemished record, and who Gen. Hyten himself stated in the evaluation he gave me, my ethics and integrity are above reproach."

Spletstoser also said Hyten "couldn't answer simple questions on sexual assault or its policy or how we handle it." During his testimony, Hyten said he'll respect survivors and take their allegations seriously. He also said he wants to ask experts to understand the best way to approach and solve incidents of sexual misconduct. He added that Congress and the Pentagon must work together on a solution.

Sen. Richard Blumenthal said he was "deeply dissatisfied" with Hyten's statements about how he would handle sexual assault cases. The senator said he has "unresolved questions" for Hyten, as well as "concerns about his judgment."

Another senator questioning Hyten's judgment was Sen. Joni Ernst, who is a survivor of sexual assault herself. She said she had "concerns" about his "judgment and ability to lead one of the highest positions in the U.S. military" due to the way he handled allegations made against Spletstoser.

Hyten's possible promotion to the nation's No. 2 military position will have to wait on a vote from the Senate. Armed Services Committee Chairman Jim Inhofe says he expects full support for Hyten's confirmation. The vote will likely be after the August recess.