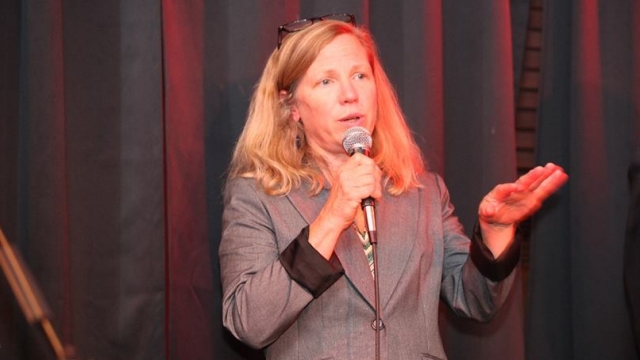 By Lauren Stephenson
October 27, 2016
Margaret Flowers wasn't polling at 15 percent, so she didn't qualify for the debate. But that didn't stop her.
SHOW TRANSCRIPT

A Maryland candidate for the U.S. Senate crashed a debate between her opponents Wednesday night.

"If you don't mind leaving the stage at this point so that we continue with this organized debate," WJZ-TV anchor and debate moderator Vic Carter asked.

"Well, I'm a candidate on the ballot. I have a statewide campaign," Margaret Flowers responded.

You might be asking, "If she's a candidate, how is she crashing the debate?"

Well, Margaret Flowers  didn't qualify for it. The debate rules only allowed candidates on stage if they had at least 15 percent support in the polls.

"I mean, you say you're a public university and you want to educate the public, but without having a full public discussion, that doesn't actually happen. So how does this serve democracy or serve the public if I'm excluded from this discussion?" Flowers asked.

Flowers didn't get an answer to her question. Police escorted her out of the room.

Flowers did have the opportunity to debate her opponents earlier this month though it does not appear to have been televised.

And that's even with the most unpopular Democratic and Republican presidential candidates in history.

The Libertarian and Green parties sued the Commission on Presidential Debates last year with no success.

Stein and Johnson found their own ways to debate. They live-tweeted the debates — but they likely didn't have the attention of the 70- to 80-million-person audiences Hillary Clinton and Donald Trump had.

Stein's campaign even streamed the debates and included Stein's on-camera responses to the questions.

Stein and Johnson did participate in individual town halls hosted by CNN over the summer.