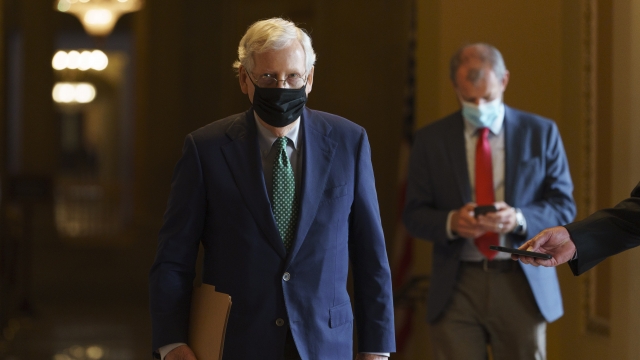 James Packard: "Newsy senior politics editor Andrew Rafferty joins us from Washington D. C. Andrew. You know, obviously there is a lot of focus on a few senators in particular right now. Lisa Murkowski getting that one headline. But there are others who could decide whether Mitch McConnell can get that 50 point threshold, because it's a simple majority he'd need now and a 50 vote, Uh, for confirming a new justice would mean that the vice president would get to push the nomination through. So in terms of which senators we should be talking about this morning, do you have any names?"

Andrew Rafferty: "Right. So, James. Right now, there's 53 Republican senators, as you pointed out, and the ones there's really two buckets that I think we're gonna be watching over the next few months. Number one are those senators is Republican senators who are in tough reelection campaigns. There's like Cory Gardner from Colorado, Thom Tillis of North Carolina, who are up for election in November and are either running closer behind their Democratic competitors. But I think the more interesting bucket are those moderate Republicans, one of which you just mentioned Lisa Murkowski. Another one Mitt Romney. Very familiar to a lot of people ran for president on 2012. But Susan Collins is actually somebody who fits both those buckets. She's generally a moderate, supports some abortion rights, her and Lisa Murkowski. And these are the two those are the two female Republican women who are so critical, no matter when a Supreme Court justice comes up for a vote, whether it's an election year or not. But she's also in a very tough political battle of her own up in Maine. Public polling shows her down right now, and so I think Susan Collins is probably going to be one of the key names that we keep watching over the next month and a half and even, uh, going closer to 2021 if this battle continues out into the new year, James."

Packard: "There's some talk today, Andrew, of Mark Kelly, the Democrat running to oust Republican Martha McSally in Arizona. That race looks really good for him, um, folks proposing the idea that he could take over that seat mid-November if he wins because it's technically a special election there. Level set for us. Is there any teeth to that idea?"

Rafferty: "Right, so that was John McCain's old seat that Martha McSally was appointed to after losing a Senate battle of her own. And there were some election lawyers in Arizona — who has spoken to the media — who said that, yeah, this is a special election, generally, in those cases that the person who was dubbed the winner after the what's called the canvassing the final tally of the votes is seated. So that would put around Nov. 30. But we know that this is already turning out to be one of the most litigious elections in recent history. Of course, 2000 was the most recent example of something that made its way all the way up to the Supreme Court. We know that both Republicans and Democrats up and down the ballot are preparing for legal battles, so I expect this will certainly fall into that if, in fact, Mark Kelly, the Democrat, does win. It's important to note here too, James, that according Congressional Research Service, it takes 67 days on average, to go from appointing Supreme Court vacancy to getting it filled. And so these are not things that happened overnight. The election is sooner than 67 days. And so that Nov. 30 date could prove to be pretty keen. It could be a pretty big battle here in Washington and certainly as well as in Arizona."

Packard: "And yet, you know, perhaps somewhat ironically, Ruth Bader Ginsburg's nomination confirmation process is one of those that fell shorter than the average. And within this window of the 45 days we're looking at till the election, um, you know, Andrew, there were issues pressing critical issues that you and I were talking about yesterday afternoon before we learned this news. And, of course, this now has blown that out of the news cycle. But that doesn't mean the problems have gone away. Coronavirus relief among the most critical things also in front of Congress right now, and the consequences of inaction there are painful for suffering Americans right now. We talked to a woman in San Diego yesterday who's a single mom worried about eviction, doesn't know what to tell her kids. I mean, does the fight ensuing over the Supreme Court vacancy make it even more unlikely that those Americans who are suffering right now we're going to get the help they need?"

Rafferty: "You know, I think. I'm afraid that it might, because this is a time period, regardless, when Congress doesn't tend to do a whole lot, it's what we call close to the lame duck session. But there is nothing that Congress really wants to put on its plate that's too aggressive in the days and weeks ahead of an election. We do know that there is going to be government funding battle that will need to be resolved. Otherwise, the government will partially shut down, as well as what you talked about the coronavirus relief, which has had spurts of optimism for those watching. But it is ultimately fell short for another round of relief. This does complicate things. It certainly doesn't make anything easier. And I think it's going to be another party battle that overshadows some of these more direct issues that are impacting people like you talked, people who are really hurting right now amid a pandemic."