New Bill Would Prevent Trump From Unilaterally Withdrawing From NATO 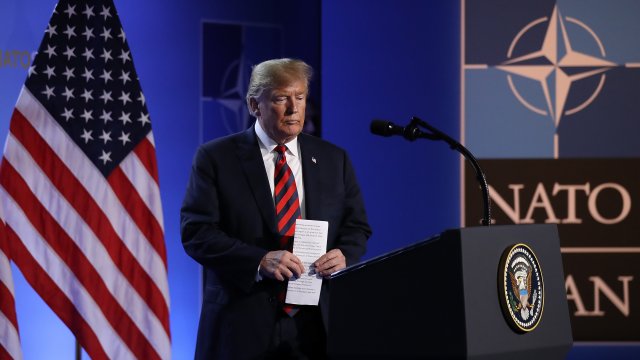 By Stephanie Liebergen
January 18, 2019
A bipartisan group of senators introduced a bill that would require any president to get Senate approval to withdraw from NATO.
SHOW TRANSCRIPT

A bipartisan group of senators introduced a bill to prevent President Donald Trump from unilaterally withdrawing from NATO.

President Trump has frequently railed against other NATO countries for not paying their "fair share" towards the alliance. And he reportedly discussed pulling out of the group multiple times in the past year.

The new bill would require any U.S. president to get approval from two-thirds of the Senate to "suspend, terminate or withdraw the United States from the North Atlantic Treaty."

Sen. Tim Kaine, one of the bill's eight co-sponsors said, "The President’s reckless decision-making — his abrupt withdrawal of U.S. troops from Syria and Afghanistan, his pullout from the Iran nuclear deal and Paris climate agreement, and his deference to Vladimir Putin — is destroying strategic partnerships we have forged with allies across the world."

A similar bill was introduced during the previous Congress, but it never went anywhere.