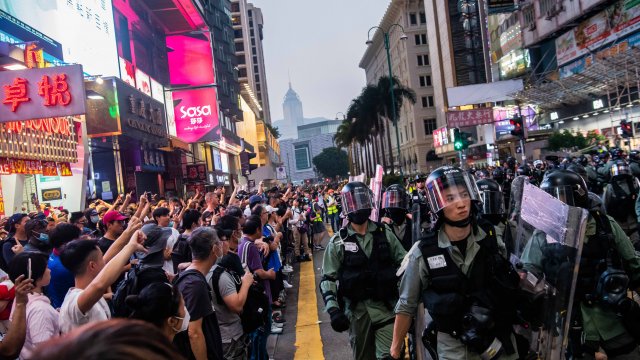 Three Republican senators have unveiled legislation that would slap sanctions on Chinese and Hong Kong authorities trying to infringe on the rights of pro-democracy protesters.

Hawley explained the meaning behind the name during a speech on the Senate floor last week:

"The protesters say that they're going to be like water. They say: 'Be water.' And some have actually referred to this as a water movement. They mean be fluid, be reactive, adjust to the situation," Hawley said.

The bill would condemn China's government for violating its obligations under the Sino-British Joint Declaration of 1984 and the basic law of Hong Kong.

It calls for sanctions on Hong Kong and Chinese officials "responsible for suppressing or facilitating the suppression of Hongkongers' freedoms of speech, association, assembly, procession, and demonstration."

And it would demand freezing the assets of Chinese nationals and state-owned enterprises that have contributed to the suppression of free speech in Hong Kong.

The protests in Hong Kong have been going on for months now. In late October, Hong Kong's Legislative Council formally withdrew a controversial extradition bill that sparked the protests in the first place. But it's unclear if it will meet the protesters' other demands.