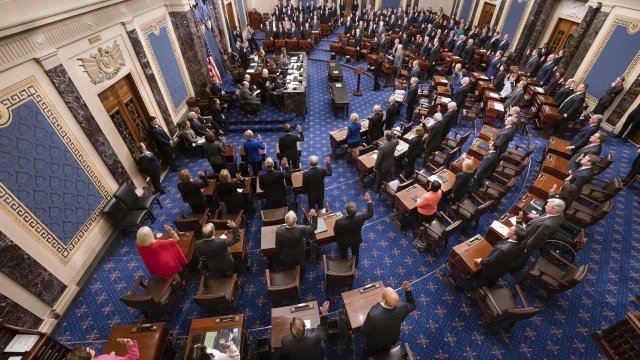 Senate Majority Leader Mitch McConnell made some concessions to rules in the impeachment trial of President Donald Trump. But important issues remain.

First on evidence. The house impeachment managers, all Democrats, can now admit evidence from the House record in the Senate trial unless there's a vote against it.

The duration of opening arguments has changed, too. Rather than forcing each side to make their opening statements in 24 hours over two days, it'll now be divided into three. That likely means ending each night around 9 p.m. rather than after midnight.

But there's still no agreement on calling witnesses — at least not yet. McConnell says that will be discussed after opening statements.

"Fair is fair. The process was good enough for President Clinton, and history dictates it ought to be good enough for this president as well. So the eyes are on the Senate," he said.

"Will there be a fair trial? I submit that this is an even more important question than how you vote on guilt or innocence because whether we have a fair trial will determine whether you have a basis to render a fair and impartial verdict. It is foundational. The structure upon which every other decision you will make must rest," impeachment manager Rep. Adam Schiff said.

McConnell led a fight against several amendments from senate minority leader Chuck Schumer. He wanted to subpoena White House, State Department and other agency's documents, as well as new witnesses. Those were all rejected.

"The rules he proposed are a national disgrace for this reason: Impeachment is the only other power that Congress — that the Constitution gives when you have an overreaching president, and we know that this president has overreached more than any other president," Schumer said.

"The House chose not to pursue the same witnesses they apparently would now like, would now like the Senate to pre-commit to pursuing ourselves. As I've been saying for weeks, nobody, nobody, will dictate Senate procedure to United States senators," McConnell said.

The start to this impeachment trial comes as President Trump is overseas at the world economic forum in Davos. He again called the trial a "hoax," preferring instead to talk about the economy.

"We've regained our stride, rediscovered our spirit and reawakened the powerful machinery of American enterprise. America is thriving, America is flourishing. And yes, America is winning again like never before," President Trump said.

The trial continues with debates on motions Wednesday afternoon at 1 p.m. Eastern. Then, opening statements from house managers are expected. Newsy will carry every minute live — without partisan spin.