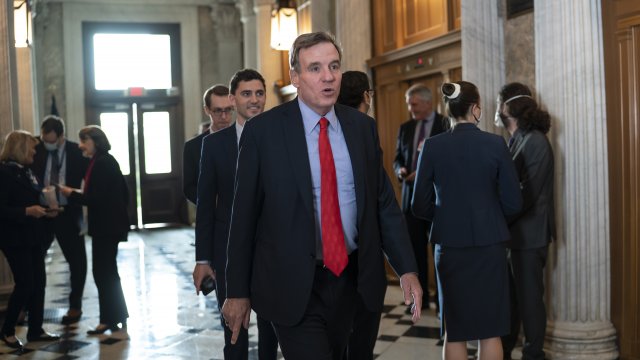 SMS
Sen. Mark Warner Concerned About U.S. Intel Leaks Regarding Ukraine
By Sasha Ingber
By Sasha Ingber
May 12, 2022
Sen. Warner is concerned about recent leaks that lift the veil on how U.S. intelligence is helping Ukraine to kill Russian generals and sink ships.
SHOW TRANSCRIPT

In an interview with Newsy, on a busy day in Congress, the head of the Senate's Intelligence Committee warned that Vladimir Putin is backed into a corner and still dangerous.

"I think there may be at least some indication that Putin is still concerned about even further escalation," Chairman Sen. Mark Warner said.

Putin's spokesperson said Thursday that if the West interferes in Ukraine, Russia will give "the most resolute response."

NEWSY'S SASHA INGBER: Is Putin a terrorist in your eyes?

Sen. Warner is concerned about recent leaks that lift the veil on how U.S. intelligence is helping Ukraine to kill Russian generals and sink the flagship Moskva.

He says the U.S. must continue to share critical intelligence with Ukraine, despite the threat of a Russian reprisal.

INGBER: Now, we haven't seen Russia retaliate in the United States. Why do you think that is? Are they waiting for the election, what is this?

SEN. WARNER: This is the dog that hasn't barked. I don't think we're out of the woods yet, in terms of a potential Russian cyberattack at a much higher level either against Ukraine, against Europe or against America.

An end to the war remains elusive.

"At the end of the day, you know, we do need to continue to figure out if there's an exit ramp for Putin," Sen. Warner continued. "But It's going to be hard to say to the Ukrainian people, and I don't think you'll hear this from American or even Western leadership, that somehow President Zelenskyy and his forces that have fought so hard, are going to somehow have some peace imposed on them by the outside. This is going to have to be ultimately decided by the Ukrainians and the Russians."

The senator would not say how the U.S. should respond if Russia uses chemical weapons against Ukraine, saying it shouldn't be signaled in the media.