Sen. Rand Paul Might Hold Up A Vote On Government Funding ... Again 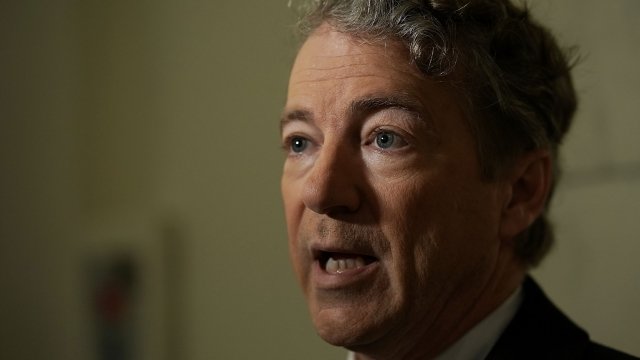 SMS
Sen. Rand Paul Might Hold Up A Vote On Government Funding ... Again
By James Packard
By James Packard
March 22, 2018
The Senate has to vote on a funding bill and get the president's signature on it by midnight Friday or the government shuts down ... again.
SHOW TRANSCRIPT

The bill to fund the government past Friday is in the Senate's hands, but it's not all smooth sailing. Lawmakers have only had since Wednesday night to read the full text of the bill, and that's not sitting well with everyone.

"These things have been long works in progress. The finishing touches came out, uh, this week, and we have a hard deadline we're working up against," House Speaker Paul Ryan said.

Then there's Sen. Rand Paul, who's threatening to delay a vote on the bill in the Senate while he works his way through it. He's been live tweeting his progress and where he thinks the bill goes wrong. Most of his problems are with how much the government plans to spend — $1.3 trillion in all.

Senate rules require all 100 members to be on board with holding a vote, and Paul might try an old tactic — holding up the vote to bring some attention to his priorities. If the bill doesn't get a stamp of approval from the Senate and a John Hancock from the president by midnight tomorrow, the government will shut down again.