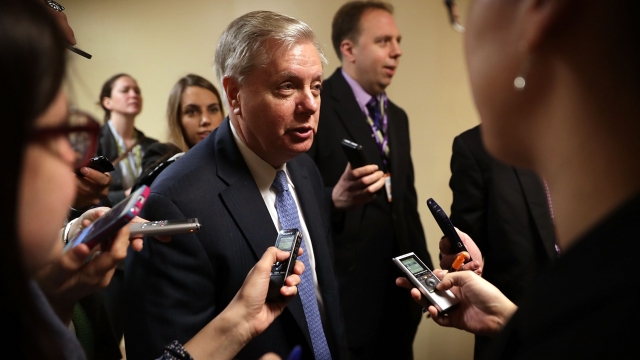 Sen. Lindsey Graham has endorsed Ted Cruz as the GOP scrambles to block Donald Trump from locking down the Republican nomination for president.

The former Republican presidential candidate says he plans to help Cruz in "every way [he] can" — a surprising statement from a man who expressed his dislike for Cruz just last month.

"If you killed Ted Cruz on the floor of the Senate and the trial was in the Senate, nobody would convict you," Graham joked at the Washington Press Club Foundation's Congressional Dinner.

But while some of the establishment once laughed at the thought of Trump securing the nomination, the conversation has shifted to the damage he could do to the party.

"Hopefully, there is time to still prevent a Trump nomination, which I think would fracture the party and be damaging to the conservative movement," said Sen. Marco Rubio, a former Republican presidential candidate.

And as the race goes on, far more sitting Republicans are throwing their support behind Ted Cruz than Donald Trump.

According to a list compiled by FiveThirtyEight, Trump has received two endorsements from Republicans currently in office in March, while seven have thrown their support behind Cruz.

Regardless of mainstream support, Trump is still besting Cruz in the primaries by more than 250 delegates.

This video includes clips from Donald J. Trump for President, Inc. and Cruz for President and images from Getty Images.