In Farewell Letter, McCain Tells America Not To 'Hide Behind Walls' 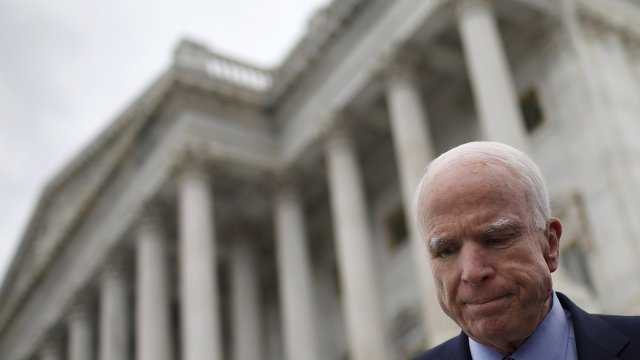 Before his passing, U.S. Sen. John McCain penned a farewell letter to America.

In it, he thanked the country for the privilege of serving —  he was a Navy veteran and spent 35 years in Congress. McCain said he'd made mistakes and had regrets, but wrote that he hoped his love for America shined through.

His letter also addressed the current tension across the country.

He wrote, "We weaken [our greatness] when we hide behind walls rather than tear them down, when we doubt the power of our ideals rather than trust them to be the great force for change they have always been."

McCain died Saturday after a yearlong battle with brain cancer. He was 81.

Please read my father's farewell letter to the country he loved so much - “Do not despair of our present difficulties but believe always in the promise and greatness of America, because nothing is inevitable here. Americans never quit. We never surrender.” 🇺🇸 pic.twitter.com/pwZUR7R3dp