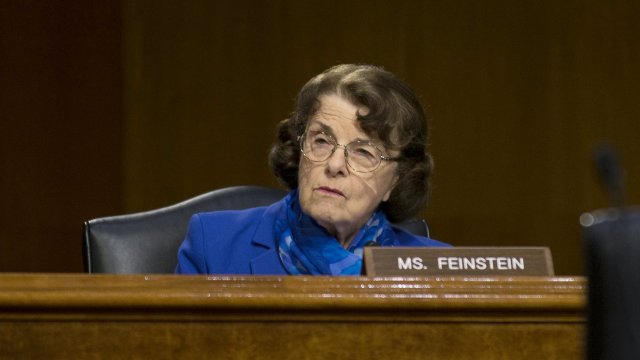 SMS
Sen. Feinstein 'Voluntarily' Talked To FBI About Husband's Stock Sales
By Katherine Biek
By Katherine Biek
May 15, 2020
Sen. Dianne Feinstein's husband sold as much as $6 million worth of stock in a biotech company before the stock market nosedived.
SHOW TRANSCRIPT

Sen. Dianne Feinstein has handed over documents and spoken to federal law enforcement agents about her husband's stock trades.

Feinstein's spokesman told multiple news outlets that the California Democrat "voluntarily" answered the FBI's questions in April and that there have been "no follow up actions" taken since.

According to Feinstein's financial disclosures, her husband, investment banker Richard Blum, sold as much as $6 million worth of stock in a biotech company between Jan. 31 and Feb. 18. That's just before the market nosedived amid the coronavirus pandemic.

Under the 2012 Stock Act, it's illegal for lawmakers to use insider information to make trading decisions.

Feinstein has denied any wrongdoing, writing on Twitter in March that she "has no input" on her husband's financial decisions and that his sale was "unrelated" to the pandemic.

News about Feinstein's cooperation with the FBI came after agents reportedly confiscated Sen. Richard Burr's cellphone as part of its investigation into his stock transactions prior to the market downturn. Burr has since stepped aside as chairman of the Senate Intelligence Committee amid that investigation.