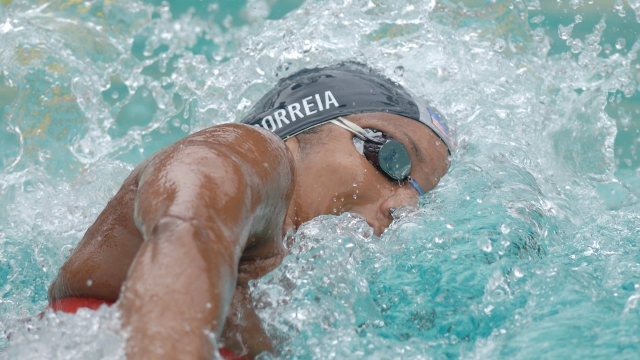 "I  actually had longer hair back then and I actually for the Olympic trials, I cut my hair," said Maritza McClendon.

Maritza McClendon broke barriers at the 2004 Athens games as the first black American woman to qualify for the U.S. Olympic swim team...going on to win a silver medal in the 4x100 freestyle relay. But  during that time she struggled to use tight fitting regulation swim caps to cover her hair.

"So when you have a cap, a company like Soul Cap who comes up with a solution, it's pretty disappointing that there is an international organization out there that will continue to keep that barrier up," McClendon said.

The International Swimming Federation or FINA, which is the administrative body for aquatic sports for the Olympics....has recently come under fire for its rejection of a cap that swimmers like Maritza say would be more comfortable for black swimmers. Soul Caps product allows more room for those with natural hair.  FINA said the caps do not “follow the natural form of the head.”

"I think that that is extremely hurtful," McClendon said. "It's definitely sending a message, especially to people who have natural hair, people of color. You don't belong at the elite level."

FINA has since apologized and is reconsidering its decision. But now the organization has also caught the attention of U.S. lawmakers like Sen. Cory Booker who is also lending his voice, along with the support of over a dozen senators urging for more inclusion in the sport.

"This is an area for lawmakers and policy to continue what has been an American tradition of people taking steps [to] work against discrimination in sports, discrimination in other areas of society that affected people based upon gender or race or religion," said Senator Booker. "It's fundamental to the ideals of our country."

FINA says it will allow the company behind Soul Cap to reapply for use at the elite level but that won’t be in time for the Olympic games underway in Tokyo. Either way for McClendon and those who’ve come after her it’s representation that matters most.

"The wonderful thing about where we are today [with] diversifying the sport is that we're starting to think about what is it that prevents black people from swimming," McClendon said.  "And one of those issues is hair."