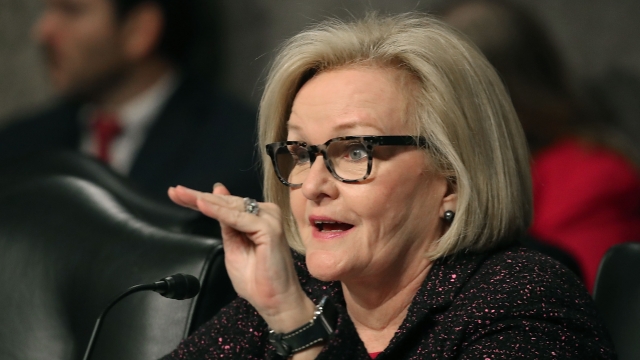 "The day-to-day work that many of us are doing with our Republican colleagues just doesn't see the light of day," Sen. Claire McCaskill says.

"It's one of the few regrets of my presidency — that the rancor and suspicion between the parties has gotten worse instead of better," Obama said during his last State of the Union address.

So if some politicians want to end the divide, why does it still seem so problematic?

"Nobody ever calls me and says, 'I'm calling to ask the senator to compromise.' ... If you want more things to get done in Washington, promote compromise," said U.S. Sen. Claire McCaskill of Missouri during an April 2017 town hall meeting.

Ask any lawmaker if they're willing to work with the folks on the other side, and they'll probably say yes. But McCaskill says the everyday cooperations often go unnoticed.

"Nobody's gonna write a headline about how Mike Crapo and I have gotten together — a very Republican, conservative senator — and we're working on this legislation to alleviate a regulatory burden on farmers as it relates to pesticides," McCaskill said. "... The good news stories, it's very hard for them to get oxygen, especially in this crazy time where something wild is happening every day. ... So the day-to-day work that many of us are doing with our Republican colleagues just doesn't see the light of day."

"Every day I'd watch it and was like, 'Thank God I'm not in the middle of this,'" said former Speaker of the House John Boehner.

But when it comes to the big issues, compromise might be harder to find. The confirmation of Justice Neil Gorsuch was a high-profile partisan battle. And the GOP's health care bill failed, not only because they couldn't get any Democratic support, but also they didn't even have the support of their whole party.

The efforts to reform our nation's tax laws might be the next big fight.

"I'm on the finance committee, and we will handle the tax reform bill," McCaskill said. "I am looking to work with Republicans and try to find the right way to stir job creation and do all that. But so far, they're only talking among themselves."