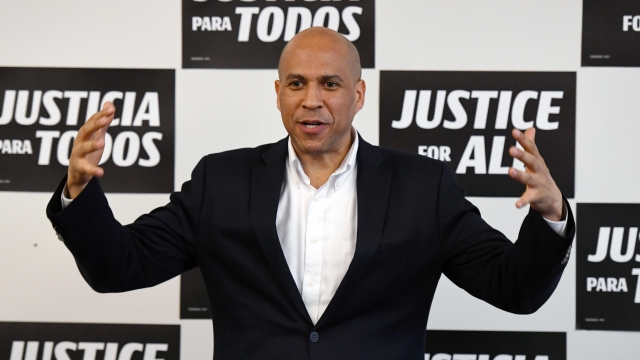 Sen. Cory Booker announced a plan to offer clemency to thousands of nonviolent drug offenders if he becomes president.

Booker introduced The Restoring Rights Initiative on Thursday. It would grant "an estimated 17,000-plus" people serving time in federal prisons for nonviolent drug offenses an opportunity for early release. The heart of Booker's proposal is to help counteract the effects of the War on Drugs, which he says has been "tearing families apart, ruining lives, and disproportionately affecting people of color and low-income individuals  —  all without making us safer."

Under the initiative, three groups of people serving sentences in federal prisons would be "immediately considered for clemency": those serving time for marijuana offenses; those "incarcerated with unjust sentences due to the sentencing disparity between crack and powder cocaine"; and those with sentences that would have been shorter under the First Step Act.

The First Step Act, which President Trump signed into law late last year, reduced mandatory minimum sentences for certain drug offenses, among other things. But the bill's sentencing provisions weren't retroactive. That means, as Booker puts it, someone sentenced before the bill took effect "is serving more time than someone sentenced a day later" for the same offense.

With all of that being said, the plan would not guarantee anyone's immediate release. A new bipartisan federal panel would be created to review potential candidates prior to prisoners' release.

Booker says he would begin the clemency process "on day one of his presidency," since the commander-in-chief can grant clemency without having to run it by Congress first.

The U.S. senator from New Jersey will take part in the first Democratic presidential primary debate of the 2020 campaign on Wednesday.