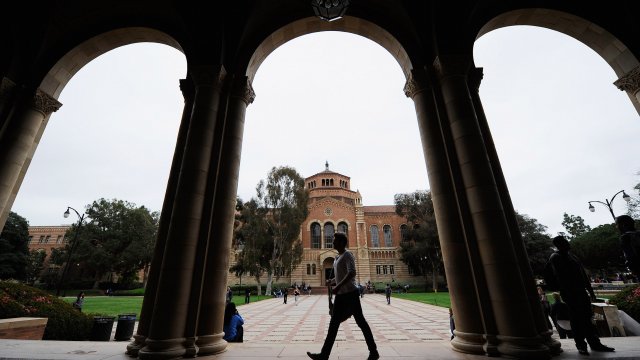 Sen. Bernie Sanders is proposing a plan that would erase all student loan debt in the U.S. Along with Reps. Pramila Jayapal and Ilhan Omar, the presidential hopeful unveiled legislation that would forgive $1.6 trillion in student loans for roughly 45 million Americans, regardless of income or assets. It's called the College for All Act. In addition to canceling the loan debt, the plan would also make two- and four-year public colleges and universities tuition-free. The estimated price tag on the initiative is around $2.2 trillion, and the lawmakers say they'll pay for that by implementing a new Wall Street transaction tax. Sanders isn't the only presidential candidate homing in on higher education issues. Sen. Elizabeth Warren has also presented a debt relief package, but that proposal has limits based on income level. It's also a topic that the Trump administration has been focusing on. The White House recently proposed revising some federal student loan programs with the goal of driving down college tuition costs. According to Sanders, the new bill would boost the economy by approximately $1 trillion over the course of a decade by saving student loan borrowers money annually. Additional reporting from Newsy affiliate CNN.

Correction: A previous version of this story incorrectly called Reps. Jayapal and Omar senators. The story has been updated.