'Selma' Is A Best Picture Nom, So Why Is It Dubbed A Snub? 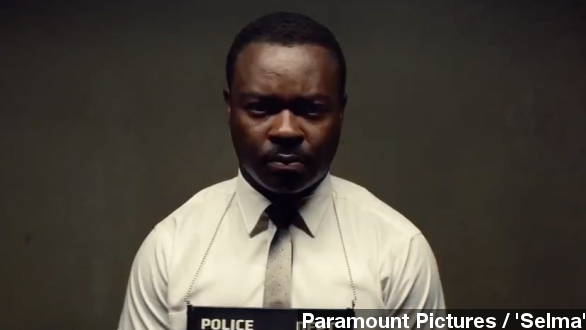 SMS
'Selma' Is A Best Picture Nom, So Why Is It Dubbed A Snub?
By Madison Conklin
By Madison Conklin
January 15, 2015
"Selma" is officially nominated for two Oscars, including best picture. So why was it shut out of the other major categories?
SHOW TRANSCRIPT

The 2015 Oscar nominations are out, and critics are astonished by the number of nods "Selma" received from the Academy.

That number would be two. The biopic about Dr. Martin Luther King Jr.'s march for equal voting rights from Selma to Montgomery, Alabama, received a nod for best original song and ... get this ... best picture.

So, let's get this straight. "Selma" is a best picture nominee, yet David Oyelowo didn't receive one for best actor in a leading role. The movie's director, Ava DuVernay, is not nominated. Quickly, everyone is saying "Selma" was snubbed.

"Birdman" and "The Grand Budapest Hotel" are both best picture nominees, and led the 2015 Oscars with nine nominations each.

And, for example, five of the nine nominations "Birdman" received were in major categories: best picture, best actor, best supporting actor and actress and best director.

But with "Selma," we have a best picture nominee being ignored in every major category.

The movie has a whopping 99 percent approval rating on Rotten Tomatoes. The site summarized: "Fueled by a gripping performance from David Oyelowo, Selma draws inspiration and dramatic power from the life and death of Martin Luther King, Jr."

So, what went wrong here for the Academy? We can't know for sure, but there's been some controversy surrounding the movie — like its historical accuracy.

The Washington Post highlights how the film inaccurately represented Lyndon B. Johnson. He was portrayed as being at odds with King and reluctant to enact the Voting Rights Act of 1965.

Or was it the film's leaders, Paramount and DuVernay's, fault for not getting it screened by the Screen Actors Guild voters before the deadline? That was an early awards-season shutout, and the SAG awards often help determine Oscar noms.

Vanity Fair poses a question that's hard but necessary to consider: In the year after "12 Years a Slave" dominated, were voters simply turned off by another civil rights movie?

Ultimtaely DuVernay seems to be staying positive, writing on Twitter: "Happy Birthday, Dr. King. An Oscar gift for you."