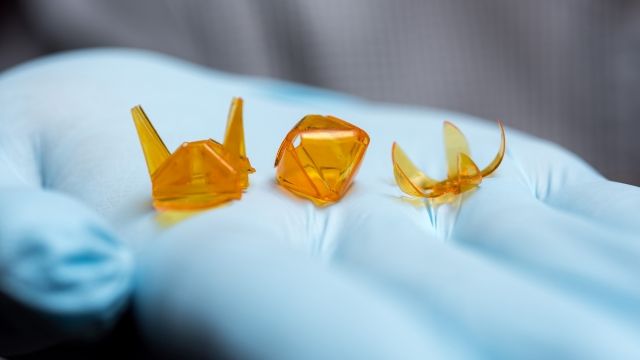 SMS
Self-Folding Origami Could Lead To Self-Folding Robots
By Evan Thomas
By Evan Thomas
April 28, 2017
Researchers have figured out how to make materials fold themselves into origami-like shapes. That could be useful for all sorts of robots.
SHOW TRANSCRIPT

These little shapes aren't just pretty origami. Scientist have figured out how to get them to fold themselves, which could bring us closer to self-assembling robots.

Researchers in Atlanta and China projected patterns onto light-sensitive resin so it curled and folded itself as it hardened. Tuning the light source changed how much a shape bent and the direction it bent in. The result was intricate designs less than an inch wide.

The researchers think self-assembling origami could make it easier to build custom electronics or medical tools. They and other scientists are interested in foldable robots — something that can arrange itself and then do something useful with its shape.

NASA is developing bots that can fold themselves to go places rigid ones can't and to help explore exotic locations. This one from Massachusetts Institute of Technology is less than half an inch long, but it can swim, climb and even carry things. 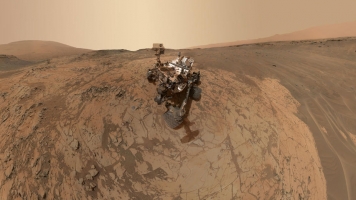 This Small Robot Could Change The Way We Explore Other Planets

Tiny origami robots are especially promising for medical applications inside the body. One version unfolds itself from a capsule to recover swallowed objects or to patch wounds.

That might be a good fit for these resin shapes, especially since the technique can be applied to different materials. Robots in the future might fold themselves up, do their jobs and then dissolve when they're done.