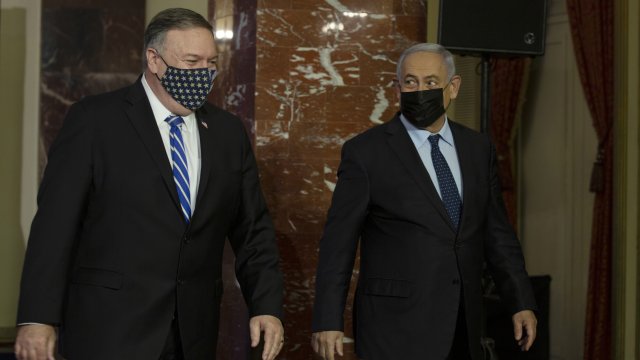 Secretary of State Mike Pompeo is now the highest-ranking U.S. official to visit an Israeli settlement in the West Bank.

Thursday he announced products made in the settlements can be labeled "Made in Israel."

The policy furthers the U.S.'s recognition and acceptance of the settlements in the occupied territory — a disputed region between Israel and Palestinians.

Pompeo also announced a new U.S. policy against the Boycott, Divestment and Sanctions movement, which protests Israel's policies toward Palestinians.

"Today, I want to make one announcement with respect to a decision by the State Department that we will regard the global anti-Israel BDS [Boycott, Divest, Sanction] campaign as anti-Semitic. I know that sounds simple to you, Mr. Prime Minister, since it seems like a statement of fact. But I want you to know that we will immediately take steps to identify organizations that engage in hateful BDS conduct and withdraw U.S. government support for such groups," Pompeo said.

In a statement, the BDS movement accused the U.S. of intimidation and bullying and said it rejects "all forms of racism, including anti-Jewish racism."