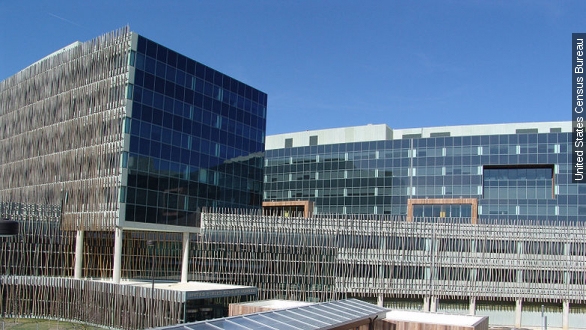 A security guard at the U.S. Census Bureau in Suitland, Maryland has been killed after a gunman opened fire at the facility Thursday.

According to multiple outlets, an area fire department official says a guard at the front gate of the complex was shot at least one time in the upper body. The guard, who was reportedly around 30 years old, was not identified and died shortly after the shooting. (Video via CNN)

The bureau is located about 10 miles southeast of the capital. According to WRC-TV, police say, "somebody tried to ram the gate with a vehicle of some kind before the guard was shot."

Then, according to WJLA, "a car matching the description of the gunman's vehicle was spotted by D.C. police fleeing in Northeast Washington after a report of an armed kidnapping." No further details were provided about the alleged kidnapping.

The Post says the suspect was shot in the head after a shootout; he is still alive but the FBI says the incident has "ended." (Video via MSNBC)

Local officials are working with federal authorities to investigate the incident. According to the Post, an FBI spokesperson doesn't believe the attack was "linked to terrorism."

This video contains images from the United States Census Bureau.