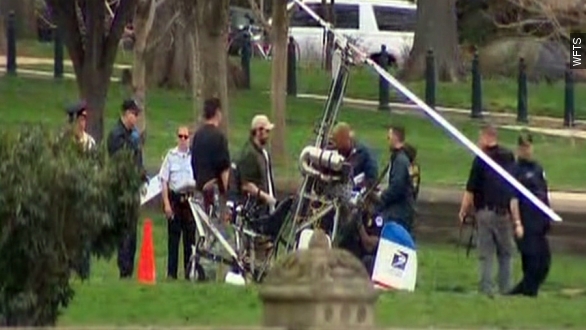 Doug Hughes flew a gyrocopter to the Capitol lawn to warn Congress about campaign finance reform. Instead, people questioned how he got by security.

A postal worker from Florida brought a special delivery to the Capitol building in Washington, D.C., Wednesday — himself. In a gyrocopter.

The next day, he appeared in federal court where he was charged with knowingly operating an unregistered aircraft and violating national airspace.

This man, Doug Hughes, told the Tampa Bay Times he's on a mission to warn Congress about campaign finance reform.

"I'm going to have 535 letters. ... Change the government to build a wall of separation between government and big money so that government will represent the people," Hughes said.

This plan had apparently been in the works for a while. Hughes had a live stream of his flight set up dated 2013, and in the description that accompanied it, he wrote that he wanted to bring awareness to an issue: "Corruption in Washington D.C. has robbed the U.S. citizens of the representative government that is our birthright."

The reporter who wrote the original Tampa Bay piece went to Washington to watch the flight and tweeted, "It worked, looks like," with a picture of the gaggle of reporters at the scene.

But in the initial frenzy surrounding the story, his intended message was overshadowed by security concerns.

"He was successful landing that chopper on the lawn and was not shot out of the sky. What does this say about our security up there?" a Fox News anchor asked.

"How did this vehicle ... which is big enough to hold a person, has some sort of gasoline on the back, it appears, some sort of propellant, how was it able to breach the airspace around the Capitol and land close to the building?" an MSNBC anchor asked.

The Tampa Bay Times reports Hughes says a Secret Service agent questioned him about his plan last spring. He said, "I don't believe the authorities are going to shoot down a 61-year-old mailman in a flying bicycle."

Rep. Michael McCaul, chairman of the House Homeland Security Committee, told the BBC if the gyrocopter had gotten closer to the Capitol, officials were ready to shoot it down.

But speaking to reporters Thursday, the Homeland Security secretary didn't make any promises about changes to current security procedures.

"We are a democracy. We don't have fences around our airspace, so we've got to find the right balance between living in a free and open society and security and the protection of federal buildings," Jeh Johnson said.

After his court appearance, Hughes was released and allowed to return to his home in Florida, where he'll be on house arrest and monitored via GPS. He could face up to four years in prison.