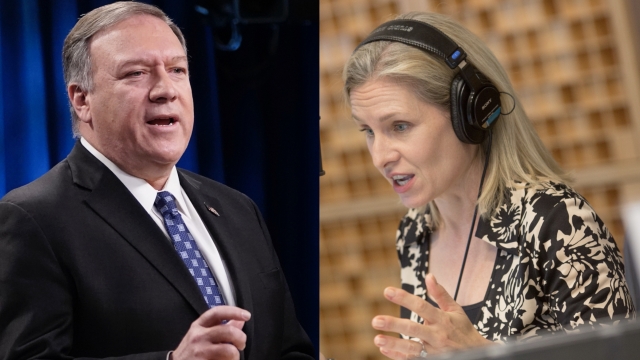 Secretary of State Mike Pompeo lashed out at a member of the media who asked about his treatment of former Ukrainian Ambassador Marie Yovanovitch.

On Friday, Pompeo sat for an interview with NPR's Mary Louise Kelly. In it, she started with questions about U.S. policy toward Iran and then pivoted to ask about Ukraine and the ambassador, whose removal has been spotlighted in the impeachment case against President Donald Trump. It was the topic change that seemed to frustrate Pompeo.

"You know, I agreed to come on your show today to talk about Iran. That's what I intend to do," Pompeo said.

During the interview, Kelly told the secretary that she communicated with his staff the night before and confirmed that Iran and Ukraine questions were both fair game.

After the 9-minute recorded interview, Kelly says Pompeo "glared" at her before walking out of the room. Then she says one of his aides asked her to leave her recorder behind and invited her into another room where Pompeo was waiting.

"He was not happy to have been questioned about Ukraine. He asked, 'Do you think Americans care about Ukraine?' He used the 'f' word in that sentence and many others," Kelly said on NPR's "All Things Considered."

According to Kelly, the aide did not say the side conversation was off the record.

But in a statement released Saturday, the secretary said Kelly agreed to keep the "post-interview conversation" off the record. In reporting it, he says, she violated "the basic rules of journalism and decency." He wrote, "This is another example of how unhinged the media has become in its quest to hurt President Trump and this Administration."

Kelly said during the side conversation, Pompeo asked her to point to Ukraine on a map and she did. In his statement Saturday, Pompeo implied that she incorrectly identified Ukraine, writing "It is worth noting that Bangladesh is NOT Ukraine."

NPR's Senior Vice President for News Nancy Barnes responded, saying, "Mary Louise Kelly has always conducted herself with the utmost integrity, and we stand behind this report."