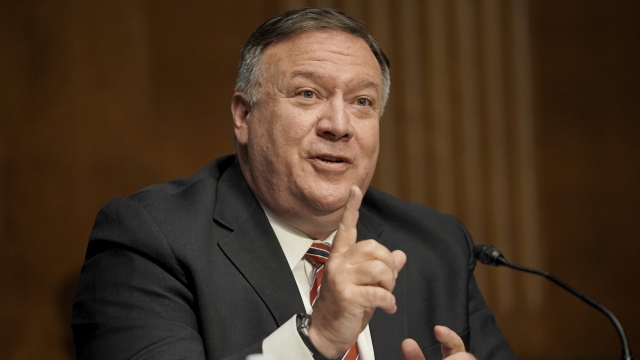 SMS
Senators Question Secretary Mike Pompeo On Foreign Policy, Leadership
By Sasha Ingber
By Sasha Ingber
July 30, 2020
Democrats and Republicans asked about plans to withdraw 12,000 troops from Germany, which the State Department secretary said he was involved in.
SHOW TRANSCRIPT

Senators used Thursday’s budget hearing with Mike Pompeo to grill the secretary of state on Russia, China and his leadership of the country’s oldest agency.

"Were you involved in the decision to withdraw troops from Germany?" Sen. Jeanne Shaheen (D-NH) asked.

Democrats and Republicans asked about the Trump administration’s plans to withdraw nearly 12,000 troops from Germany, which has drawn fears of an emboldened Russia.

There were also questions about Russian bounties for U.S. troops in Afghanistan, after President Donald Trump said he didn’t raise the issue in a call with Russian President Vladimir Putin.

"I always leave to the president what he wants to say to other leaders," he told senators.

"Boy, they need to get out more," Pompeo told him.

This after a recent spat with China when the U.S. closed the Chinese consulate in Houston, alleging it was a mainstay for spies.

Democrats pushed him on internal State Department matters, including the spring firing of Inspector General Steve Linick, who was investigating Pompeo’s use of resources and his emergency declaration for a lucrative arms sale to the Middle East.

"I know what a good IG can do. Inspector General Linick wasn't that," Pompeo told them.

They sparred on the ousting of Marie Yovanovitch, the former ambassador to Ukraine who became a key witness in the impeachment inquiry.

"It is not the case that I talk about personnel matters in public," Pompeo said.

"Wait, you were very willing to tell us what you didn’t like about the inspector general--" Sen. Tim Kain (D-VA) said.

Pompeo’s testimony was preceded by a scathing 46-page report from Democratic senators accusing him and the Trump administration of “intentional and collateral damage to the diplomatic workforce” — from failing to fill top positions to fostering a culture of fear at the State Department.

A former career diplomat echoed those concerns to Newsy.

"I think he's done a pretty abysmal job as a steward of the institution. And also, in terms of the foreign policy, where we've mismanaged our alliances, we have broken agreements and alienated many of our former friends and partners around the globe," said Laura Kennedy, a former ambassador and Deputy Assistant Secretary at the State Department.

As for the proposed budget — about $41 billion for the State Department and U.S. Agency for International Development — Congress is unlikely to heed the Trump administration’s cuts.

"This has been an administration that's repeatedly called for severe cuts that would have put the State Department pretty much out of business, except for Congress came to our rescue," Kennedy said. "The State Department has operated close to the bone for many years."