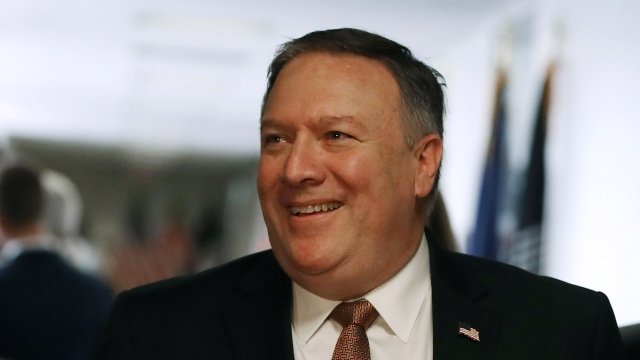 SMS
Pompeo Focuses On Iran In His First Trip Abroad As Secretary Of State
By Ethan Weston
By Ethan Weston
April 29, 2018
Mike Pompeo visited Saudi Arabia and Israel over the weekend. Both countries consider Iran a rival.
SHOW TRANSCRIPT

Newly confirmed Secretary of State Mike Pompeo seems to be using his first trip abroad to focus on Iran.

Pompeo met with officials in Saudi Arabia and Israel over the weekend. Both countries consider Iran a rival.

In Saudi Arabia, Pompeo called for Iran to be punished for its missile programs and urged officials to end a dispute with Qatar. U.S. officials are reportedly worried Iran is exploiting that rift to gain influence in the region.

In June, Saudi Arabia and a number of other countries cut diplomatic ties with Qatar and put an embargo in place over the country's alleged support of terrorism. Former Secretary of State Rex Tillerson spent a lot of his time in the State Department trying to end the dispute but had little impact.

Pompeo also told his Saudi counterpart that if the Iran nuclear deal can't be fixed, President Donald Trump would pull out of the deal.

Pompeo told reporters the same thing after a meeting with NATO allies in Brussels. Trump set a May 12 deadline for other countries in the deal to address his concerns with it.

Ahead of Pompeo's visit to Israel, Prime Minister Benjamin Netanyahu said talks would focus on Iran and its "growing aggression" as well as the Iran nuclear deal.