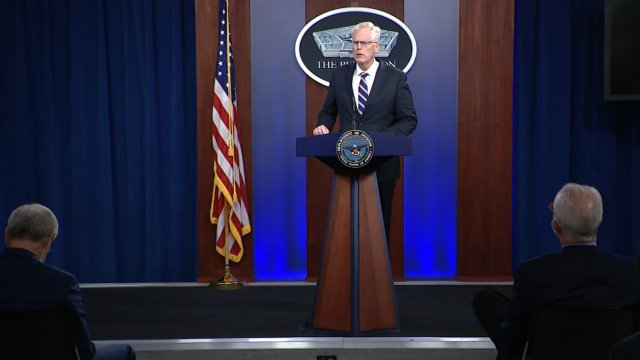 SMS
Secretary Of Defense 'Cannot Wait To Leave' Ahead Of Inauguration
By Alex Arger
By Alex Arger
January 16, 2021
Secretary of Defense Christopher Miller made the comment during a press gaggle Thursday.
SHOW TRANSCRIPT

Secretary of Defense Christopher Miller says he "cannot wait to leave" his job.

Miller has been a target of criticism over the Pentagon's response to the deadly Capitol riot on January 6. And his comments in a press conference Thursday came the same day his department mobilized at least 21,000 National Guard surrounding the inauguration.

He said of the deployment, "I have responsibility for everything, remember, if something goes wrong, I own it. Completely, 110%."

The outgoing defense secretary fielded questions on multiple topics. When asked about the military's most expensive weapons program - the F-35 fighter jet - he said: "We've created a monster." And when asked about irregular military tactics used by Russia, he quipped: "Good on them."

A defense official later told the Washington Post, "The Secretary often uses casual and humorous language with reporters." He said Miller's use of humor was "obvious to participants" at the press conference.

President Donald Trump picked Miller for the job just over two months ago after firing Secretary Mark Esper and other top defense officials.