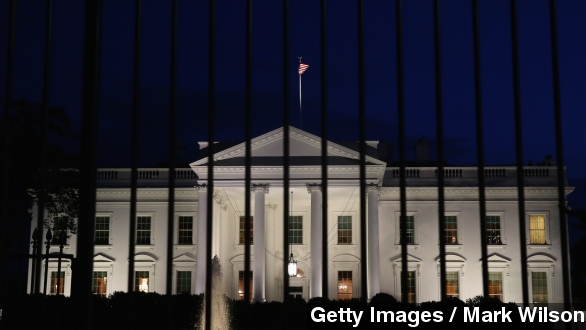 The Washington Post first reported the two attended a party on March 4 at a nearby bar and then drove through police tape before hitting a security barrier at the White House.

The Post reports the agents in question are senior supervisor George Ogilvie and Mark Connolley, who is second in command of Obama's personal detail.

Now, the Department of Homeland Security's inspector general is reportedly investigating the incident.

That's at the request of newly appointed Secret Service Director Joseph P. Clancy. This is Clancy's first major incident he will have to deal with after his appointment last month.

Clancy took over from Julia Pierson, who resigned soon after a major security breach where a man with a knife ran into the White House.

"It's the most heavily guarded residence in the country if not the world, and yet we begin tonight with a man who jumped the fence at the White House, ran across the north lawn, and made it all the way inside the front door before he was subdued," CBS's Jim Axelrod reported.

And after that incident in January, an inebriated off-duty government employee crashed a drone on White House grounds, revealing yet another security flaw.

The Washington Post reports the officers involved in this most recent incident, "had been moved to 'non-supervisory, non-operational assignments.'"