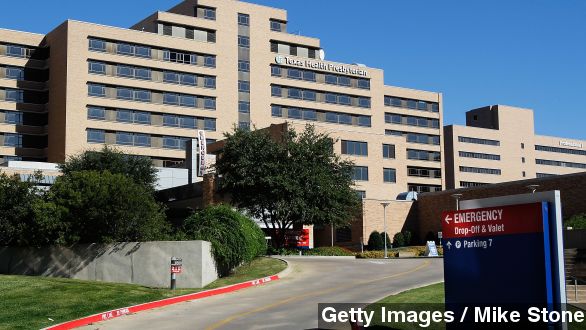 SMS
Another U.S. Ebola Case: Blame The System?
By Jake Godin
By Jake Godin
October 15, 2014
A second health care worker who also treated the first person to be diagnosed with Ebola in the U.S. has tested positive for the deadly virus.
SHOW TRANSCRIPT

A second health care worker has tested positive for Ebola at the Texas hospital which treated the first Ebola patient diagnosed in the U.S.

Like Nina Pham, the first health care worker who contracted the disease, this person was one of the Texas Health Presbyterian Hospital staff who took care of Thomas Eric Duncan, who died from Ebola on Oct. 8.

A statement released by the Texas Department of State Health Services says the worker, who was not named, reported a fever on Tuesday after which she was immediately isolated.

While the statement doesn't say how the worker became infected, nurses working at the hospital have reportedly described a "confused and chaotic" response to Duncan's initial arrival.

RoseAnn DeMoro, executive director of National Nurses United, criticized U.S. hospitals for their lack of preparedness in an article published by The Washington Post, suggesting it was the symptom of a bigger issue:

“Ebola is exposing a broader problem: the sober reality of our fragmented, uncoordinated private health-care system. … Hospitals have wide latitude to pick and choose what protocols they will follow.”

In response to a similar claim at a press conference, the chief clinical officer of Texas Health Presbyterian’s parent company said while they don’t believe it’s an institutional problem, they’re still looking into it: (Video via Fox News)

DR. DANIEL VARGA VIA MSNBC: “We're looking at every element of our personal protective equipment and infection control inside the hospitals. We don’t have an answer for this right now, but we’re looking at every possible angle around this.”

Some say the blame doesn’t lie with the hospital, but instead with standards set by the CDC which can leave some health care workers vulnerable.