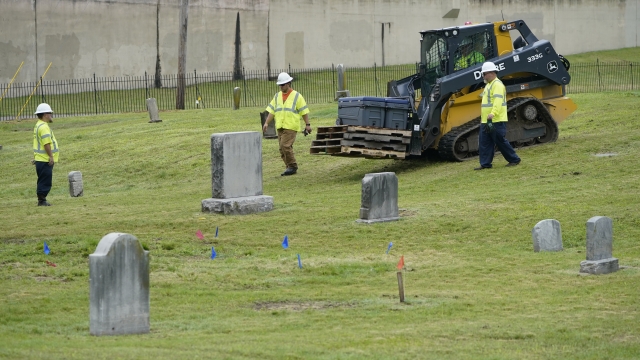 This week, search crews began digging in a second part of Oaklawn Cemetery.

Searching for victims of the Tulsa race massacre, a movement decades in the making and finally coming to a head in 2020.

"Have lived your live wondering when this narrative would have physical evidence … we have finally found a mass grave," said Forensic Anthropologist Dr. Phoebe Stubblefield.

From May 31 to June 1, 1921, the greenwood district of Tulsa, Oklahoma, was looted and burned to the ground. Hundreds of black people were killed; thousands more were rounded up and detained.

The reason? Historians link it to the unjustifiable arrest of Dick Rowland --a black man-- accused of assaulting Sarah Page -- a white woman.

Page refused to press charges, but Rowland went to jail anyways. His community feared he would be lynched as rumors about the alleged assault spread through the white neighborhoods of Tulsa.

The catalyst for so much death and destruction? Historians say it falls back to an unknown gunman.

"We recovered burial 27 and also the bullets that lead to his demise," said Kary Stakelbeck, a state archeologist.

The 14 sets of remains will be sent to a forensics lab in Utah that is helping scientists match victims to descendants through genetic testing.

Fast forward a century, research crews are excavating mass grave sites. The first dig from 2021 unearthed clues and the remains of more than a dozen potential victims.

"It is a process identifying families with DNA databases that are accessible and even then, those matches will be 3rd or 4th cousin matches most likely," said Stubblefield.

Researchers tried to connect the dots through DNA testing, but many of those samples were too degraded.

"Last year we uncovered one individual that fits the model as described in the newspaper accounts from that time," said Stubblefield.

A second excavation dig was recommended and now crews are re-exhuming some of the bodies originally found and expanding their search area.

"There needs to be some dignity placed on these forgotten folks," said Kavin Ross, Chairman at public oversight committee.