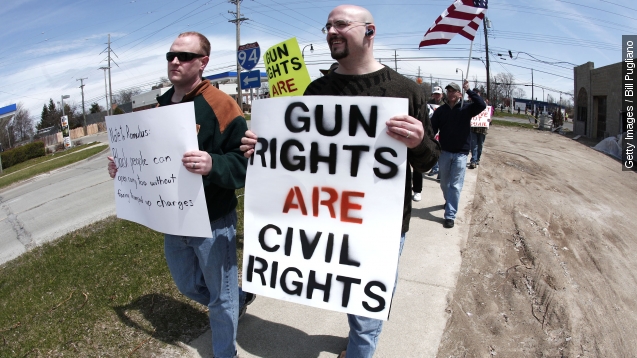 Two gun rights groups are teaming up to stage a mass shooting on the University of Texas at Austin campus this weekend.

The Austin American-Statesman reported Come and Take It Texas and Dontcomply.com will have performers act out a mock massacre Saturday to protest gun-free zones. (Video via DontComply.com)

The demonstration will feature cardboard guns, simulated gunshot sounds and even fake blood.

When the newspaper asked if the demonstration could appear tasteless following recent gun violence, a spokesman said: "Not at all. People were able to be murdered people because no one was armed. … We want criminals to fear the public being armed. An armed society is a polite society."

But the gun-free zones they're protesting are already on the way out. Texas recently passed a law allowing concealed handguns in classrooms and other public buildings on college campuses. (Video via KDFW)

Previously, state law allowed those with concealed carry permits to have handguns on university grounds, but not indoors. The new law will go into effect Aug. 1, 2016.

In an ironic coincidence, that's the 50th anniversary of one of the country's first school shootings when Charles Whitman killed 16 and injured more than 30, primarily using a sniper rifle from a clock tower at the University of Texas at Austin.

But not every school is on board with the disappearance of gun-free zones. Several schools, including Rice University, will uphold their current weapons bans thanks to a clause in the law that allows schools to opt out of some of the bill's provisions.

The school's president said in a statement, "There is no evidence that allowing the carrying of guns on our campus will make the campus safer, and the most knowledgeable professional groups believe that guns will make campuses less safe."

The University of Texas is still deciding how it will deal with the gun-free zones, but the school's faculty council called for a ban on guns in all "spaces of education."

The two groups staging the protest said they hadn't requested any sort of permit for the demonstration from the university or the city of Austin.