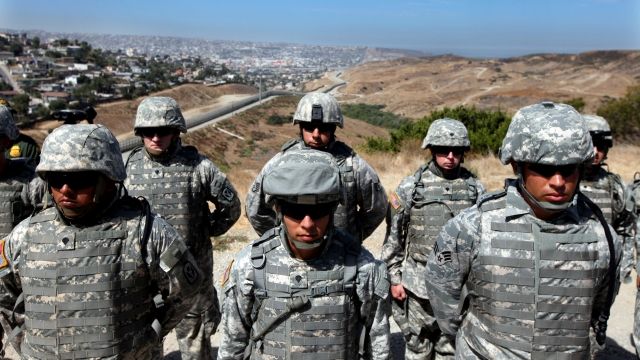 A recent report from the Los Angeles Times found that roughly 10,000 California soldiers and veterans who signed up to serve in Iraq and Afghanistan are being forced to pay back the bonuses they received to persuade them to go to war.

"Anybody who volunteers to serve in the armed forces of the United States deserves our gratitude and respect, period," said Secretary of Defense Ash Carter.

On Wednesday, Carter announced recollections would be suspended for around 2,000 soldiers until there's a more streamlined process for evaluating each case.

Here's some background on the issue. It all started about a decade ago when the military was short on troops and the National Guard had recruitment quotas to fill. The California Guard gave bonuses –– in many cases amounting to over $15,000 –– to get soldiers to re-enlist.

The problem is that certain recruiters reportedly committed fraud to meet their quotas. The generous bonuses were only meant to go to soldiers with high-demand assignments, like intelligence and civil affairs, or to noncommissioned officers in certain units.

Instead, 14,000 soldiers were given bonuses upfront, and the military then spent years figuring out who was actually eligible.

Veterans argue the only mistake they made was accepting the bonuses.

Politicians on both sides of the aisle have supported the veterans. A congressional committee asked the California National Guard to turn over all of its documents related to the scandal to see who is at fault.

It's worth noting the California National Guard reportedly came to members of Congress two years ago about this issue. At the time, the politicians didn't object to the bonus recollections.

The Pentagon has noted that every state committed these kinds of overpayments, but the California Guard was the most financially irresponsible. Aside from the bonuses, the guard also handed out student loan payments to ineligible soldiers.