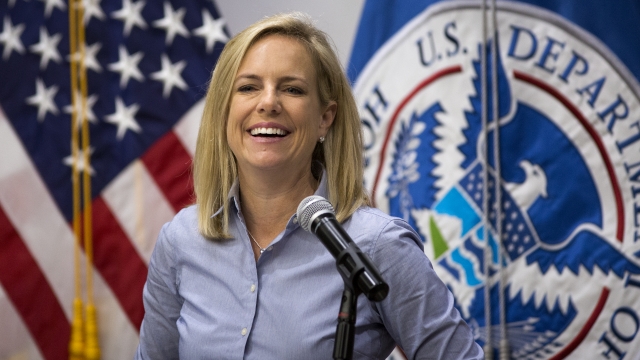 Department of Homeland Security Secretary Kirstjen Nielsen has ordered hundreds more Customs and Border Protection personnel south to respond to the "crisis" at the U.S.-Mexico border.

She sent a memo to CBP Commissioner Kevin McAleenan outlining the steps the agency should take to "combat the growing security and humanitarian crisis." Nielsen said, "The crisis at our border is worsening, and DHS will do everything in its power to end it."

In the same memo, Nielsen also expanded protocols to send certain migrants to Mexico while their U.S. asylum claims are being reviewed.

Monday's memo comes just days after the State Department announced it will cut off aid to three Central American countries at the direction of President Donald Trump. The president blamed the countries' governments for "setting up" migrant caravans.

To back it up a bit further, on Friday, President Trump threatened to close the U.S. border with Mexico this week if Mexico "doesn't immediately stop ALL illegal immigration coming into the United States."

Nielsen wrote an opinion piece on Fox News' website about the situation at the border. She said her agency apprehended more than 75,000 migrants at the southern border last month and that that was the "highest in over a decade." She said: "This is entirely unprecedented. The system is breaking."