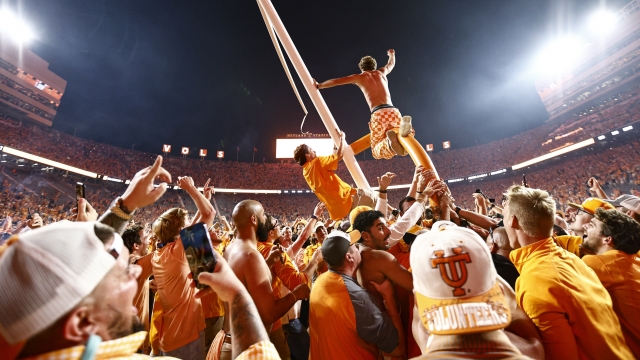 The Volunteers were fined following their 52-49 win over Alabama Saturday, when fans ripped up a goal post and heaved it into the Tennessee River.

The NCAA's Southeastern Conference has fined Tennessee $100,000 for a wild, field-storming celebration after a win over Alabama.

The third-ranked Volunteers knocked off No. 6 Alabama 52-49 on a last-play field goal Saturday at Neyland Stadium — ending a 15-game losing streak to the Tide. Fans stormed the field, ripped up one of the goal posts and heaved it into the Tennessee River.

THE GOAL POST MADE IT IN THE TENNESSEE RIVER pic.twitter.com/BXxJfd69MO

Tennessee turned to crowdsourcing to pay for replacement goal posts. More than $18,000 had been raised as of Sunday afternoon.

Athletic director Danny White tweeted “We had some fun, didn't we?” and asked fans to “help us out.”

The league announced the fine Sunday for the school's second violation of the access to competition area policy. The first came after a basketball game against Florida in 2006.

SEC policy states that “access to competition areas shall be limited to participating student-athletes, coaches, officials, support personnel and properly-credentialed individuals at all times. For the safety of participants and spectators alike, at no time before, during or after a contest shall spectators be permitted to enter the competition area. It is the responsibility of each member institution to implement procedures to ensure compliance with this policy.”

A third offense and beyond would cost Tennessee $250,000.

Name, image and likeness deals have taken hold at college campuses across the country, turning some student-athletes into millionaires.