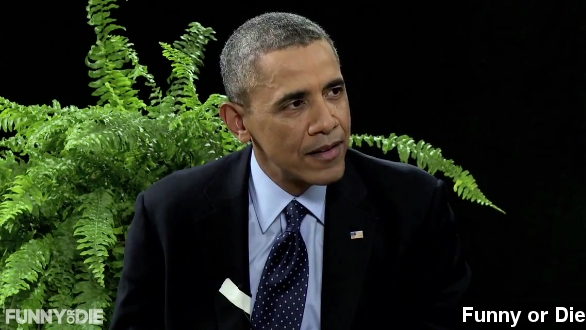 Remember when President Obama made that hilarious appearance on Funny or Die's "Between Two Ferns" last month?

"Have you heard of HealthCare.gov?"

"Have you heard of the Affordable Care Act?"

"Oh yeah. I heard about that. That's that thing that doesn't work." (Via Funny or Die)

Well, that bemoaned plugging of HealthCare.gov and sparring with host Zach Galifianakis may have helped the government program surge towards its 7 million enrollees goal. Health and Human Services Secretary Kathleen Sebelius told The Huffington Post this:

"Well, we definitely saw the Galifianakis bump. The website traffic surged once the 'Between Two Ferns' interview went on."

Shortly after the "Between Two Ferns" video was posted, TechCrunch, citing a White House official, reported it was actually the largest driver of traffic to the health care website at the time. The writer says, "They wanted hits, and they got them."

Obama's appearance might have been seen as comical by some, but others weren't laughing. NBC's Chuck Todd even poked fun. (Via Politico, Talking Points Memo, Breitbart)

"We put together a montage of what's been a giant White House health care sales pitch. ... I don't see two ferns. Can we have a round table with two ferns?" (Via NBC)

Since launching HealthCare.gov, the White House has put an emphasis on recruiting young people to check it out. It needs them to offset the costs of older, less healthy seniors.

In the same Huffington Post interview we mentioned earlier, Sebelius said, "What we're trying to do is reach people in the language that they most understand."

That "youth movement" has included teaming up with NBA basketball stars like LeBron James.

An appearance on the "Ellen" show.

"You can, at this point, get health insurance for $100 a month or less. In some cases, less than your cell phone bill or cable bill." (Via Warner Bros. Television / "The Ellen DeGeneres Show")

And much, much more — hoping to get millennials to sign up. (Via ABC)

Though, according to some outlets, it's unclear just how well that marketing strategy has worked. (Via Fox Business)

While final numbers may not be released for weeks, White House Press Secretary Jay Carney told reporters Monday the Affordable Care Act exceeded its goal of 7 million enrollees by the March 31 deadline.