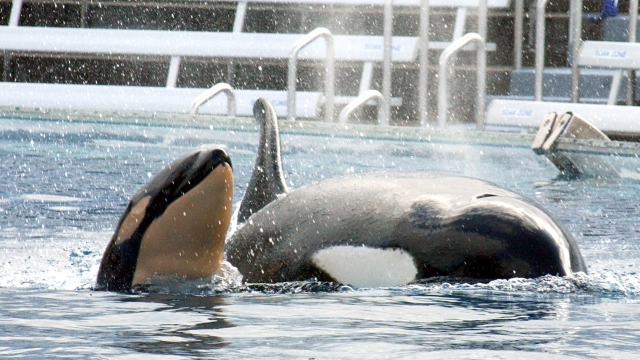 SMS
SeaWorld Will Stop Breeding Captive Killer Whales
By Melissa Prax
By Melissa Prax
March 17, 2016
SeaWorld has announced it won't be taking in or breeding any more killer whales. This is a big decision for animal rights activists like PETA.
SHOW TRANSCRIPT

SeaWorld has announced it won't be taking in any new killer whales.

SeaWorld's CEO Joel Manby said in an op-ed published in the Los Angeles Times Thursday the decision also means the company will end its orca breeding program. Proposed legislation has pressured both of these changes.

This is a monumental decision for animal rights activists, including People for the Ethical Treatment of Animals (PETA), who have long criticized SeaWorld's practices.

Earlier this month, the park announced one of its killer whales, Tilikum — who was at the center of the documentary "Blackfish" — was dying from a lung infection. That news also received some backlash.

As for those who want SeaWorld's current killer whales to be put back in the oceans, Manby warns this isn't a practical option. He said, "No orca or dolphin born under human care has ever survived release into the wild."

And in a press release, SeaWorld said any whales released could not survive exposure to unfamiliar diseases or environmental concerns, including pollution and other man-made threats.

SeaWorld reaffirmed the company hadn't taken in an orca from the wild in nearly 40 years, and said the current killer whales would get the best treatment available.