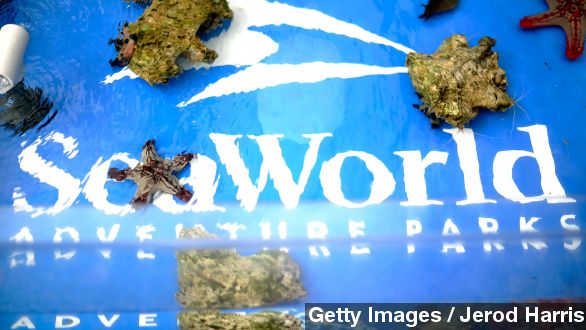 "All whales in captivity are psychologically traumatized; it's not just Tilikum," said a scientist in the documentary "Blackfish."

"Blackfish," the documentary that criticized SeaWorld for its treatment of killer whales, was released back in 2013, but SeaWorld has yet to recover from the backlash.

Now the theme park is launching an ad campaign to try to dispute the allegations levied by animal rights groups and detailed in "Blackfish."

"Our killer whales see their doctors once month, and that's the bare minimum."

The ad campaign officially launched Monday, but some of the videos demonstrating how the animals are treated and combating the negative image SeaWorld has garnered were posted online almost a week ago.

Along with the videos and TV ads, the new campaign will feature print ads addressing things like killer whales' life span in captivity versus the wild. PETA has repeatedly said the life expectancy for killer whales plummets while in captivity. One of SeaWorld's first ads to be released addresses this claim.

In a press release, PETA called SeaWorld "a sinking ship" and said, "Orcas belong in the ocean with their families, not in small concrete tanks, swimming in endless circles for years on end."

The once-popular theme park has seen a serious decline in attendance and share price. Over the past year, the company's shares have fallen nearly 40 percent, and attendance suffered a 7 percent drop from 2013 to 2014.