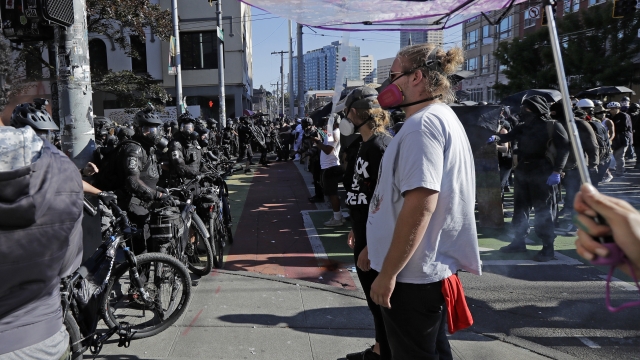 Police and marchers in Seattle were injured Saturday at the city's largest Black Lives Matter protest in weeks. Local media described the demonstration as "a peaceful protest hijacked by looters."

Chaos erupted when some protesters lit explosives, igniting a coffee shop and reportedly blowing an eight-inch hole in the wall of a police precinct. They also set fire to a construction site slated to become a youth detention center.

Authorities say officers used non-lethal weapons to disperse the crowds and that 21 police were injured from the explosives as well as thrown objects. At least 45 people were arrested.

Seattle was just one of many protests-turned-violent across the nation Saturday and early Sunday. In Louisville, three members of an armed Black militia group were injured accidentally when a gun went off during a firearms inspection.

In Los Angeles, police fired projectiles at activists and, in Austin, Texas, one man was shot and killed at a protest. The shooter fired from inside a vehicle, and police report the man who died may have approached the vehicle with a rifle.