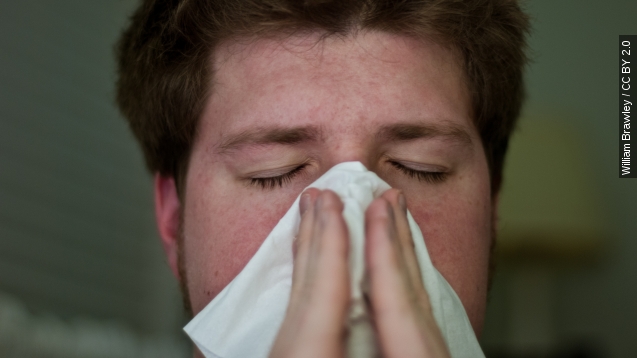 SMS
Seasonal Allergies Or Respiratory Virus? Hard To Tell
By Katie Link
By Katie Link
September 16, 2015
A virus spreading across parts of the Midwest could be mistaken for common allergies.
SHOW TRANSCRIPT

Coughing, sneezing, itchy throat — sound familiar? We usually blame those symptoms on the great outdoors, but doctors warn it could be more serious.

Common seasonal allergies present the same symptoms as a new strain of respiratory virus, making it difficult for doctors to tell them apart.

"Respiratory viruses like that one will usually spread through families, spread through employment areas very rapidly. That should be a key that it's probably more contagious and infectious," Dr. Scott Woods told WKRC.

Doctors speaking to stations in Cincinnati and Louisville point out viruses like this one usually come on quickly and can cause a fever.

"If you feel like you've been hit by a bus, it's unlikely that it's allergies," Dr. Wes Sublett told WAVE. "It's probably something more like a viral illness."

Dr. Scott Woods told WKRC the spread of the virus does appear to be slowing down.