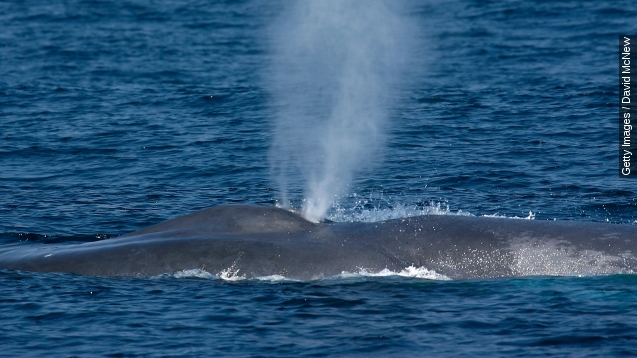 Rescue crews are looking for a blue whale that was seen Friday tangled in hundreds of feet of commercial fishing line off the California coast.

NOAA personnel, whale experts and the U.S. Coast Guard are trying to find a blue whale trapped in a commercial fishing line off the coast of California. (Video via KGTV)

A whale-watching tour first spotted the animal on Friday, where it was swimming near the surface. (Video via KABC)

But after the whale disappeared, rescuers paused their efforts that night. Search efforts on Saturday were unsuccessful. (Video via ABC)

NOAA officials say the line could be some 400 feet long.

One official told ABC: "If the line runs across its mouth, it can keep the animal from from eating. ... If entangled on the fluke or dorsal or pectoral fins, it could eventually cause infection, cut or even sever the appendage."

NOAA requests that anyone who spots the whale should call its whale hotline or notify the Coast Guard. (Video via KGTV)