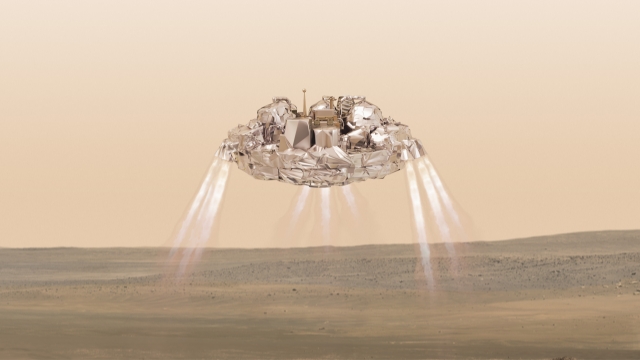 By Evan Thomas
October 15, 2016
ExoMars is the latest effort to find life on the red planet. It's part of a wave of Mars missions in the next few years.
SHOW TRANSCRIPT

The latest mission to the red planet is doing what most of them have been doing these days: hunting for signs of life.

SEE MORE: Mars Was Nicer When It Rained Asteroids

ExoMars 2016 is a joint mission between the European and Russian space agencies. It comes in two parts.

First, the orbiter will investigate trace gases that might have come from biological activity. Then, its tiny lander will test a rocket-powered braking system for a full-size science rover that will launch in 2020. That rover — you guessed it — will search for signs of life.

But we've been combing Mars for biological clues since the Viking program in the '70s, and we haven't found any yet. So why are we still at it?

We know conditions on Mars were more hospitable earlier in its history. Liquid water was even on the surface. And knowing if there was life there — or if there's life there now — could be critical in helping us plan for eventual human visits.

And what's special about 2020? It's not just a nice round number. Every 26 months, Earth and Mars are closer than usual, which makes trips between the two faster and cheaper.

NASA is launching its own Mars rover in 2020, and India and China are planning to send their own rovers by then, too. Never mind signs of life — the ExoMars rover might end up hunting for parking space.