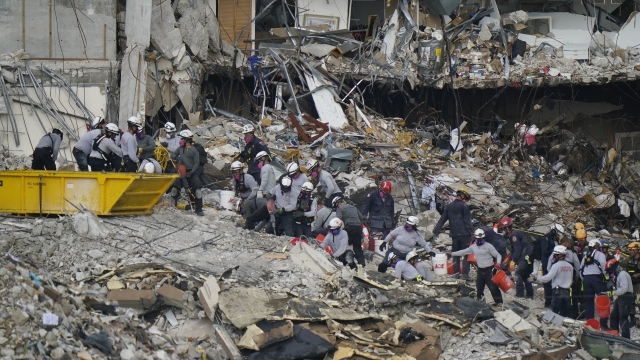 SMS
Search Continues For Condo Collapse Survivors In Surfside, Florida
By Simon Kaufman
By Simon Kaufman
June 29, 2021
At least 11 people are dead and more than 150 are still missing.
SHOW TRANSCRIPT

We're now entering day six as search and rescue crews dig through the rubble where a condo collapsed in Surfside, Florida.

We now know the president of the condo association wrote a letter to residents In April warning that dire repairs were needed. Those fixes were set to  cost $15 million. But that warning came more than two years after a report about structural damage to the building.

The death toll from the collapse is now at 11. More than 150 people are still missing.

Family and friends are desperate for any information about loved ones. They know the reality — that no one has been found alive since hours after the collapse Thursday.

"There's, there's hope. I really believe miracles do happen. Things like this have happened around the world and forces," said Martin Langesfeld whose sister and brother in law are missing. "The best teams are on this mission right now and I truly believe."