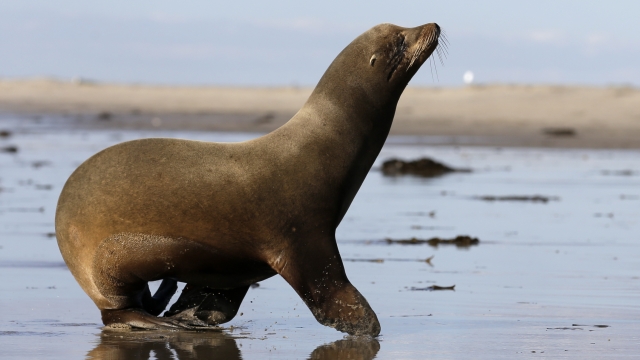 A TikTok video showing dozens of San Diego beachgoers running and jumping out of the way of two fast-moving sea lions has generated nearly 10 million views and sparked conversations about whether the mammals were going after people and reclaiming picturesque La Jolla Cove's narrow strip of sand.

But sea lion expert Eric Otjen of SeaWorld San Diego said what he saw was normal sea lion behavior for this time of year, when males are sparring as breeding season gets underway.

Otjen said the male flopping along at a rapid-fire pace as he darted around people was fleeing from the other male closer to the water's edge that was chasing him because they were likely fighting over which females they could get. Both sea lions had ample opportunities to attack people but instead barreled past them, he said.

"He's got swimmers all around him on his way back out, but they don't bother him. What this is all about is his right to mate," Otjen said, adding: "This behavior is not uncommon at all. The reason why the video has gotten like 10 millions views is because everybody is running like Godzilla is chasing them."

And with good reason, he added.

"It may look funny that everybody is running, but it's not a bad choice. You don't want to be caught in the crossfire," Otjen said. "Even if they don't bite, it's not a great feeling to have 200 to 300 pounds roll over you."

According to the National Oceanic and Atmospheric Administration's guidelines, people should stay at least 50 feet away from sea lions, seals and other species protected by the Marine Mammal Protection Act.

Otjen said for questions on behavior of the animals or to report a sick or injured animal, people can all SeaWorld's hotline at 800-541-7325.