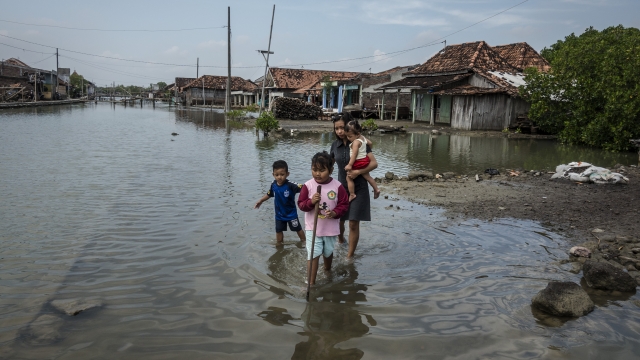 Extreme flooding that used to happen to some coastal cities and island nations every hundred years could happen every year by 2050.

Sea levels are rising faster than scientists previously estimated as ice in the ocean and cryosphere melts rapidly. That's according to a new report from the U.N.'s Intergovernmental Panel on Climate Change.

The report was announced on Wednesday, just days after the U.N. climate summit. Over 100 scientists from 36 countries have contributed to it.

The report predicts that if humans keep operating business-as-usual, the ocean could rise three feet by the year 2100 — about 12% higher than the same group estimated in 2013. Twenty to 90% of coastal wetlands would be lost. And extreme flooding that happens to some coastal cities and island nations every hundred years could happen every year by 2050.

The panel said in a press release that meeting the goal set in the 2015 Paris Agreement would preserve "ecosystems and livelihoods." To date, 186 countries have formally agreed to the treaty, but the U.S. is set to leave the agreement in 2020.