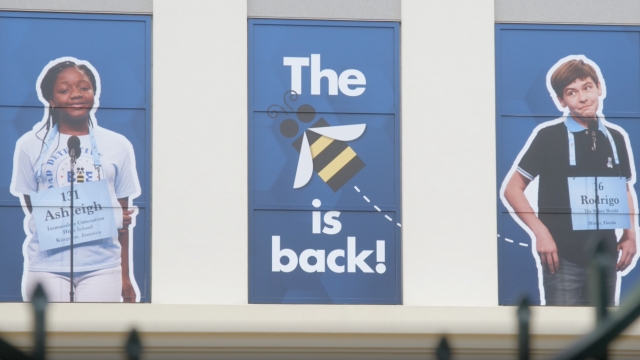 We're here in Orlando, Florida for the televised return of this year's Scripps National Spelling Bee. Eleven kids are competing against each other — and the dictionary — to win the first bee held since 2019.

Twelve-year-old spelling finalist Vihaan Sibal: "I started competing in spelling bees when I was in second grade."

Fourteen-year-old finalist Zaila Avant-Garde: "If I had gotten my root vagaries right, I would have made it to the semifinals on my first try, but I didn't. And so I've been studying basically ever since."

Last year's Spelling Bee was canceled because of the pandemic — marking the first cancellation of the event since World War II.

J. Michael Durnil, executive director of the Scripps National Spelling Bee: "Teachers have had to adjust, families have had to adjust, educational systems. And likewise, the bee's adjusted in the past year to move into a virtual competition from up until the actual finals."

This year, it's a much quieter bee with only eleven kids competing in-person for the final round at ESPN's Wide World of Sports — also known for the NBA Bubble.

The original 209 national finalists competed virtually throughout June, so past years' Bee Week events, audiences and crowds are giving way to a smaller competition.

Twelve-year-old finalist Roy Seligman: "There's a lot of work that I've put into this, so I'm really excited to be here."

Twelve-year-old finalist Dhroov Bharatia: "I'm really grateful for the opportunity to showcase my talents and my hard work that I've done so far."

This year's finale  — a culmination of a year's worth of practice and local competitions — takes place this Thursday, July 8.